A Rapid and Dramatic Shift Toward Less Affordable Housing in Oregon

The COVID-19 pandemic shock resulted in significant impacts to the housing market across the nation. Early lockdowns, a push to more work-from-home, and the large millennial demographic reaching prime family-formation age dramatically increased the number of buyers on the market. The surge in demand led to a shortage of housing and large price increases. Despite these higher prices, very low interest rates and strong wage gains led to more affordable housing through 2020. However, we are experiencing a rapid erosion of affordability that began in summer 2021 and continues today. 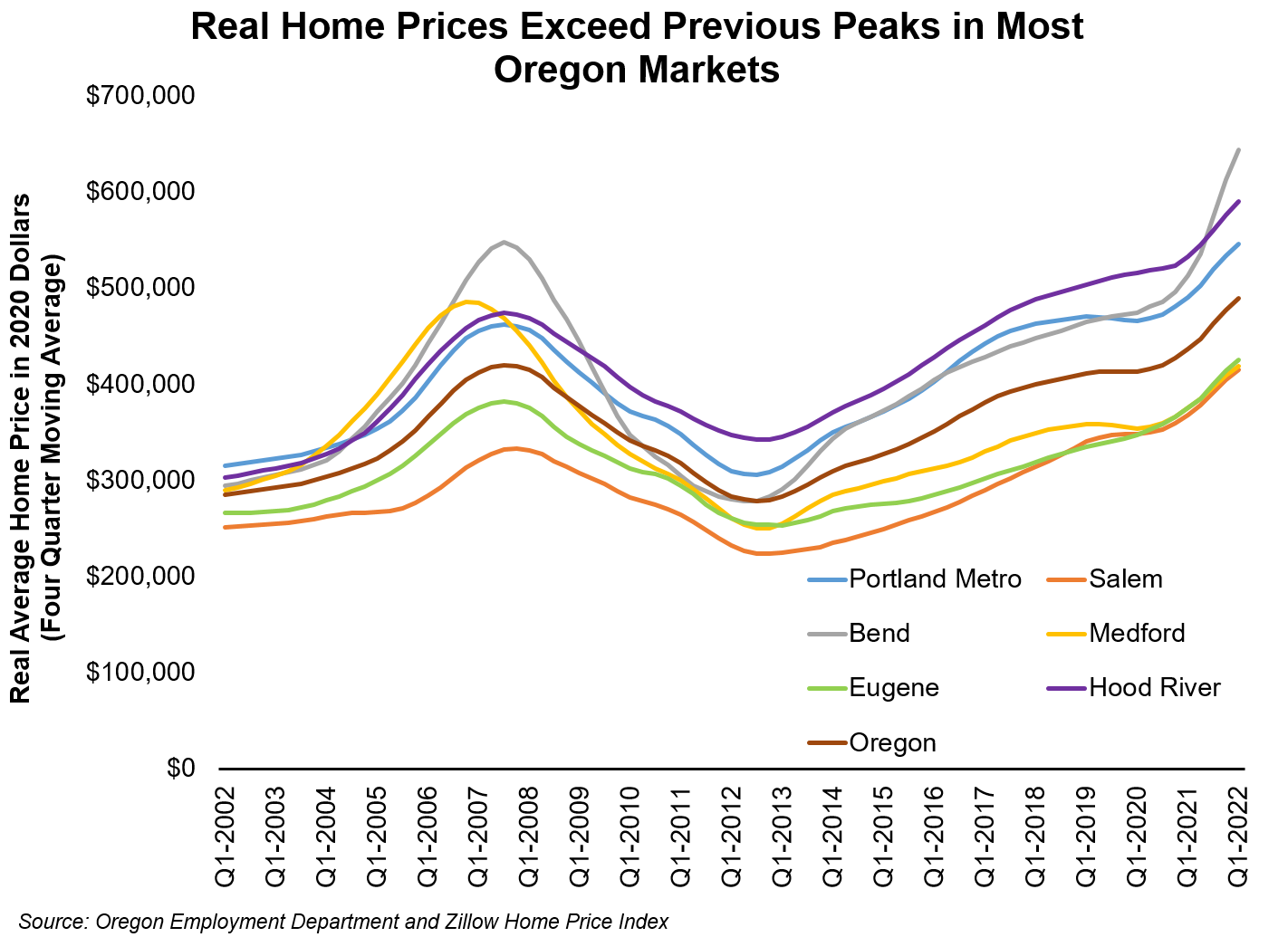 There are a variety of reasons behind this low supply state we are facing, including demographic-induced demand, years of underbuilding, and low interest rates through most of 2021. Regardless of the reasons for the lack of supply it is important to know that when supply is tight, prices rise. According to the Zillow All-Home Index, Oregon real home prices for first quarter 2022 were up a blistering 10.6% from the previous year. Before the pandemic the statewide housing market was seeing annualized gains of closer to 3%. The fast growth in home prices the past two years has pushed real (inflation adjusted) housing prices in most markets across the state higher than levels in 2007 during the housing bubble.

Incomes, Interest Rates, and the Cost of Homes

The cost of housing is a critical, if not the most important, component of housing affordability, but it isn’t the only factor that impacts the affordability of housing. In order to better understand affordability trends across the state, we need to take into account how much income Oregonians are bringing home and the cost of borrowing. Outside of home prices themselves, the largest factor affecting affordability is wages. How much money you have in your pocket (or bank account) is going to impact how much home you can buy. 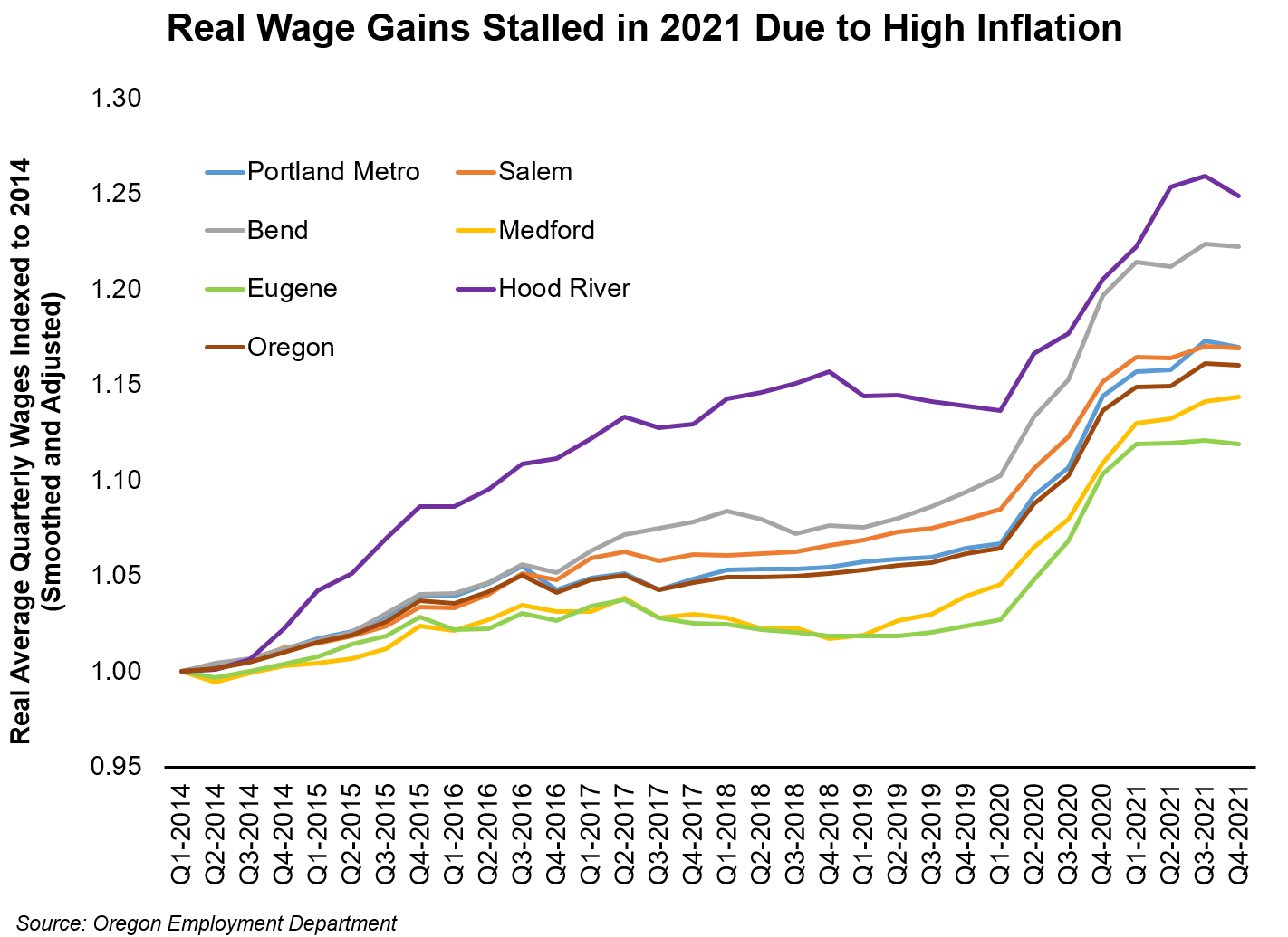 Most of these composition issues have likely worked their way through the economy, yet real wage gains have largely stalled. This is due to increased inflation eroding the nominal wage gains many workers have seen over the past year. The average payroll worker in Oregon saw their wages rise 6.1% by the end of 2021; however, after accounting for a 6.5% increase in the cost of goods and services over the past year the average worker saw their real wages fall 0.4%. To put it another way, after accounting for the changing costs of goods and services, Oregonians were making less money on average than they were a year prior.

Earlier in the pandemic, lower inflation and larger real wage gains helped to blunt the impact of rising housing costs. Although most workers would prefer to increase their discretionary spending, new buyers were able to eat those higher housing costs with higher earnings. Today, that trend is beginning to reverse as workers are seeing real declines in their income while at the same time home prices continue to rise. 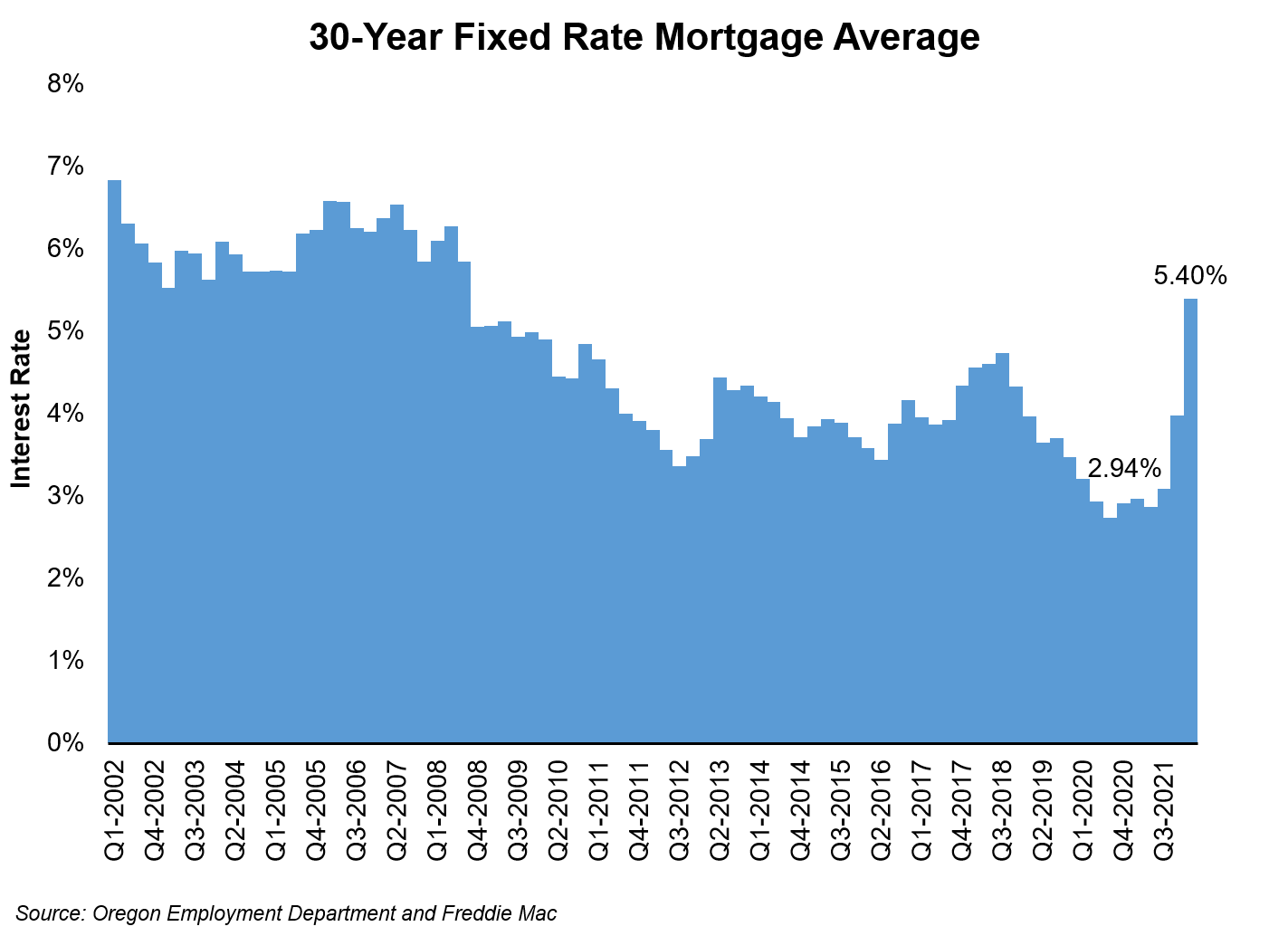 The last major variable that impacts housing affordability is the cost of borrowing, or interest rates. Most of us do not have enough cash on hand to buy a home, particularly those of us concerned about affordability. In order to buy a home we need someone to loan us money and the cost of a loan is a significant factor in housing affordability. During the past few years, 30-year fixed mortgage interest rates have been very low from a long-term perspective, but those rates moved to historic lows after the onset of the pandemic. Many home buyers (and those refinancing) were able to lock in rates below 3% during most of 2020. Similar to wages, the low interest rate environment helped slow the trend towards housing becoming less affordable.

However, those rates began to rise dramatically at the end of 2021 and in the first half of 2022. Buyers looking to get a 30-year fixed rate mortgage are getting quoted rates near 5.5%, a 2.5 percentage point increase from a year ago. That may not seem like a large increase, but each percentage point increase to the 30-year fixed rate mortgage results in roughly 10% less house that buyer can afford. That means that in the past year the average buyer with a mortgage can afford roughly 20% less home while at the same time the price of housing continues to rise. 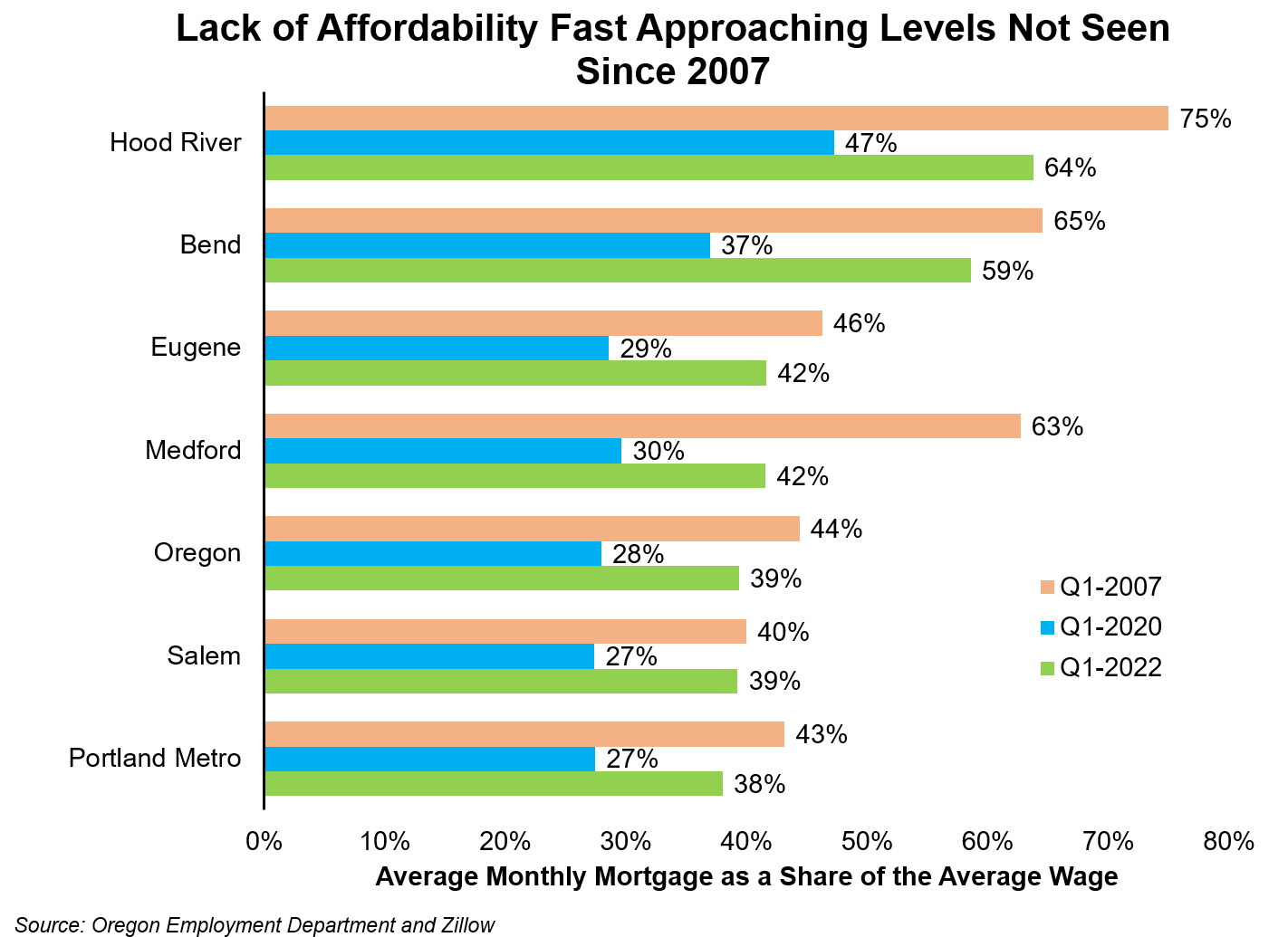 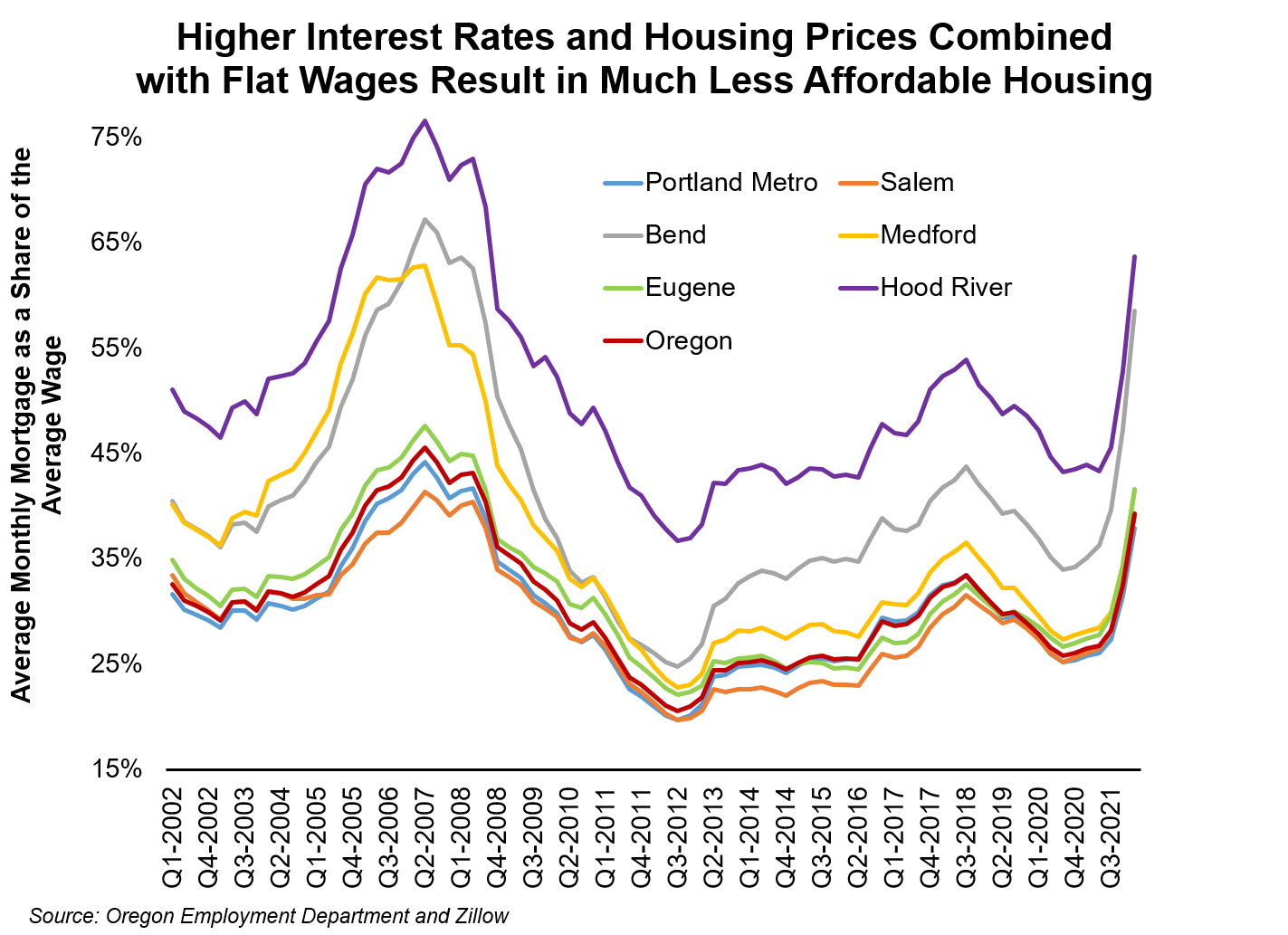 The real driver in the trend towards less affordability today are interest rates. The historic low interest rates held the dramatic increase in house prices largely in check during much of the pandemic, but that trend has since reversed. The average worker who buys the average house with today’s interest rates will spend a significantly larger share of their income on that mortgage than they would have at this time last year.

We all live in the real world and housing affordability is more complex than this simplified index. It is important not to downplay the role of higher home costs. More expensive housing means buyers need a larger down payment. If you were saving to get a 20% down payment on your first house and you were looking at a $450,000 house you would need $90,000 saved. The average home price in Oregon rose by more than 10% over the last year so that $450,000 house would now likely cost around $500,000. That means your down payment now needs to be $100,000 to get to 20% and avoid mortgage insurance. With real wages largely flat for the average Oregon worker, how could they save for that extra down payment?

Pandemic job losses disproportionally impacted lower-wage workers. Due to high demand and low supply, the more affordable homes in most markets have seen the largest price increases over the past year. The barrier to entry for first-time buyers is high and remains a distinct challenge for many Oregonians. That being said, there are some signs on the horizon that housing supply is improving. Higher interest rates are moderating demand for housing and helping to increase inventory in many markets. New housing construction has also been strong for many communities across the state, leading to more inventory. Increased inventory will help to slow home price appreciation as we move further into 2022.