Diversity in the Health Care Workforce

Oregon’s workforce is changing in many ways, but nowhere is this change as visible as in health care and social assistance (hereafter health care, for brevity). The industry is critical to economic as well as physical health in our area: health care is the largest private industry in Oregon, and offers a wide range of fast-growing and high-wage careers.

Many changes in the workforce are based on population trends and generational shifts that hold true across the economy. Just as in the total labor force, the health care workforce is getting older and more diverse ethnically and racially.

Health care and social assistance employment has typically been dominated by women. In 1991, 78% of Oregon health care workers were women. That percentage has actually come down in recent years, to about 74% in 2021. 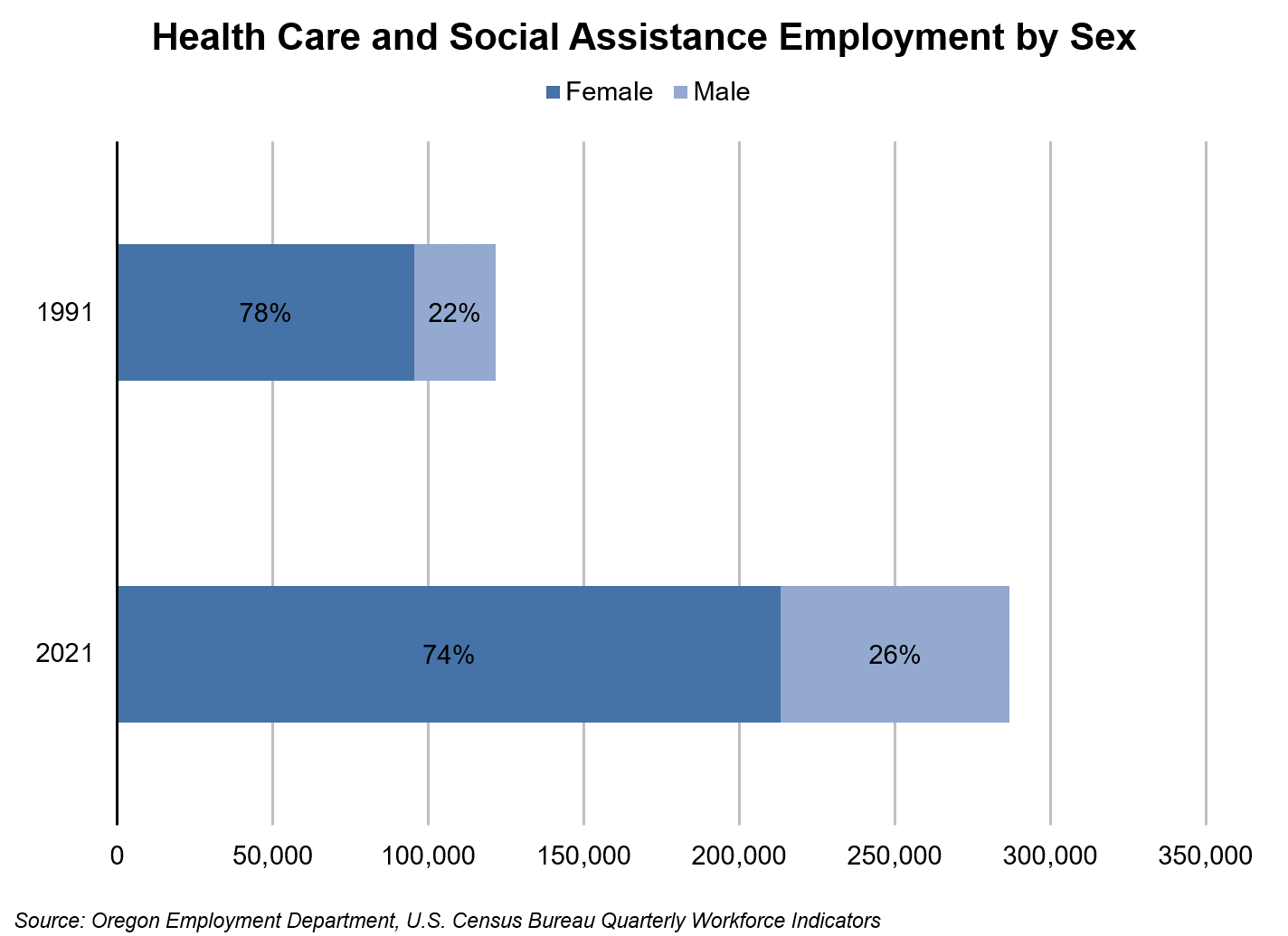 This is in contrast with the Oregon economy overall, which in percentage terms and in total added more women than men to the labor force since 1991. Slightly less than half of Oregon workers in all industries are female as of 2021.

Just as with all industries, the gender divide by occupation can be stark. Data on occupational demographics is available at the national level, and in health care some of the largest jobs are dominated by women.

More than 90% of medical assistants, nursing assistants, and dental assistants are women, which represent huge parts of the medical workforce. Registered nurses are 87% female, and many more women than men work in some specialty and technician roles such as speech-language pathologists and dietitians.

Women are much less likely to work as EMTs or paramedics as well as in particular physician roles such as surgery and dentistry. The gender gap between dental assistants and dentists, or nurse practitioners and surgeons, helps explain part of the reason that average wages in health care are lower for women than men, although this gap has narrowed over time.

In mid-2021, employment by race and ethnicity in health care exactly matched the percentages seen in Oregon’s overall employment. That means that just like most areas of the economy, the health care workforce has become much more diverse racially and ethnically in the last 30 years. 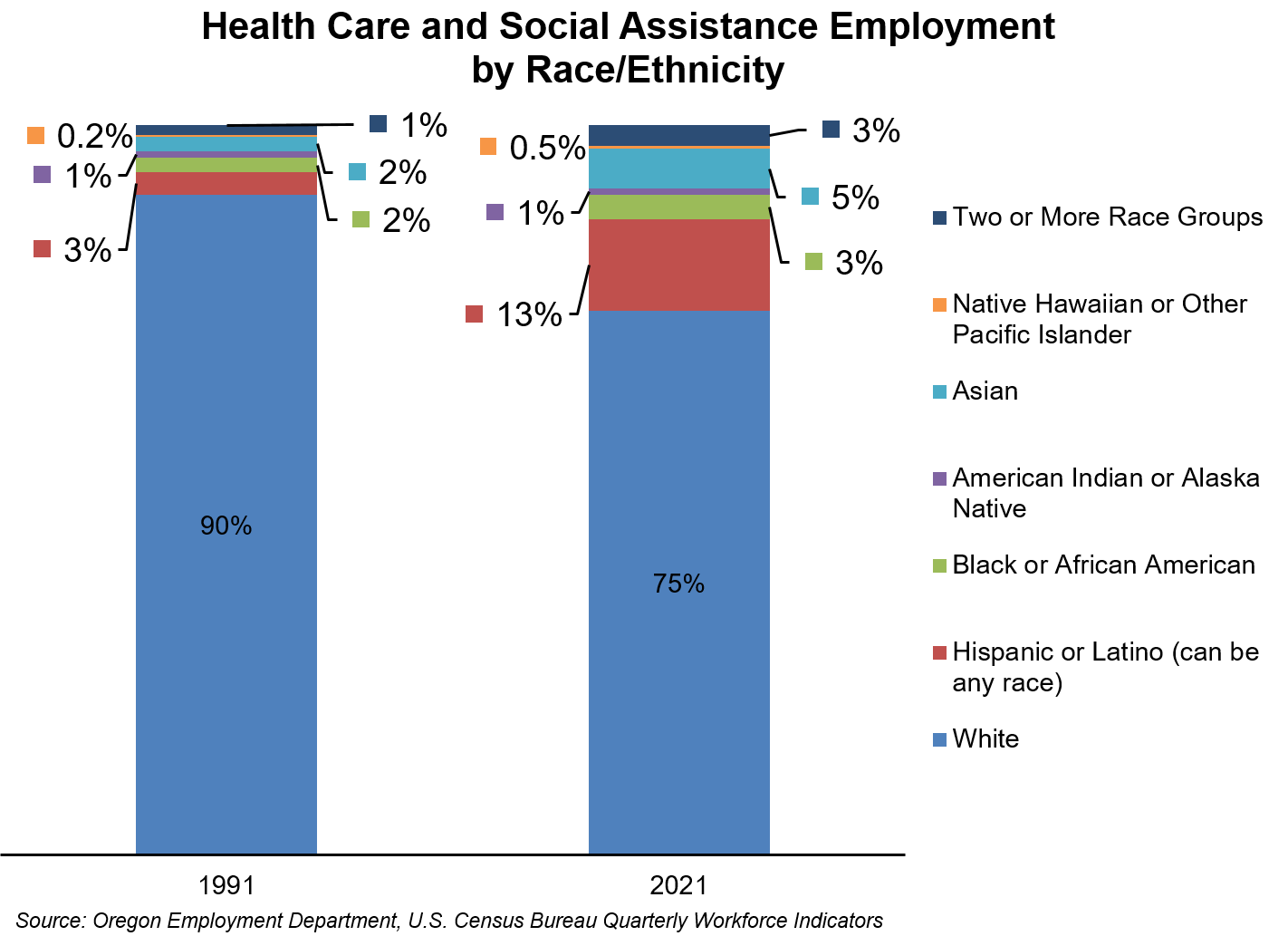 As in the total Oregon workforce, the fastest growing group is Hispanic or Latino workers (who can be of any race). There are more than 10 times as many Hispanic or Latino health care workers as there were in 1991. Every racial and ethnic group has grown with the rapid expansion of the industry, but other particularly fast growing groups are people of Asian, Native Hawaiian/Pacific Islander, or two or more race groups. As with gender, the breakdowns in occupations by race and ethnicity are far from equal in the U.S. Occupational data exists for Black, Asian and Hispanic or Latino workers at the national level. Some of the largest occupations that are most and least representative for each group are included in the table below. 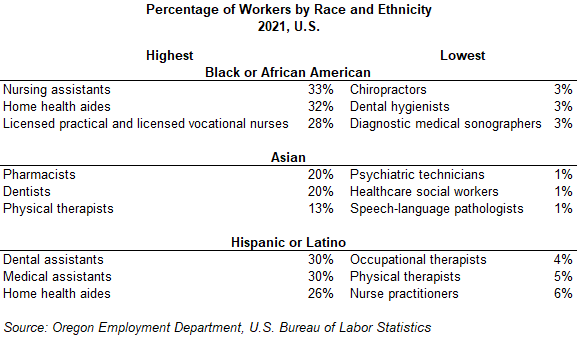 These data have important implications – not only for equity and inclusion within the sector but also the provision of health care services. If there are fewer Black chiropractors, Asian social workers, or Latino physical therapists, it may affect the general population’s ability or willingness to access the services provided in those fields.

The Oregon and U.S. population are aging, which is itself a factor in the projected growth of health care and social assistance jobs. You might expect that aging to lead to a cascading workforce transition, where younger people take on roles opened by a wave of retirements. While that is true to an extent, it’s also the case that the workforce itself is aging. Workers in general are more likely to work past 65 than they used to, and health care is no exception. 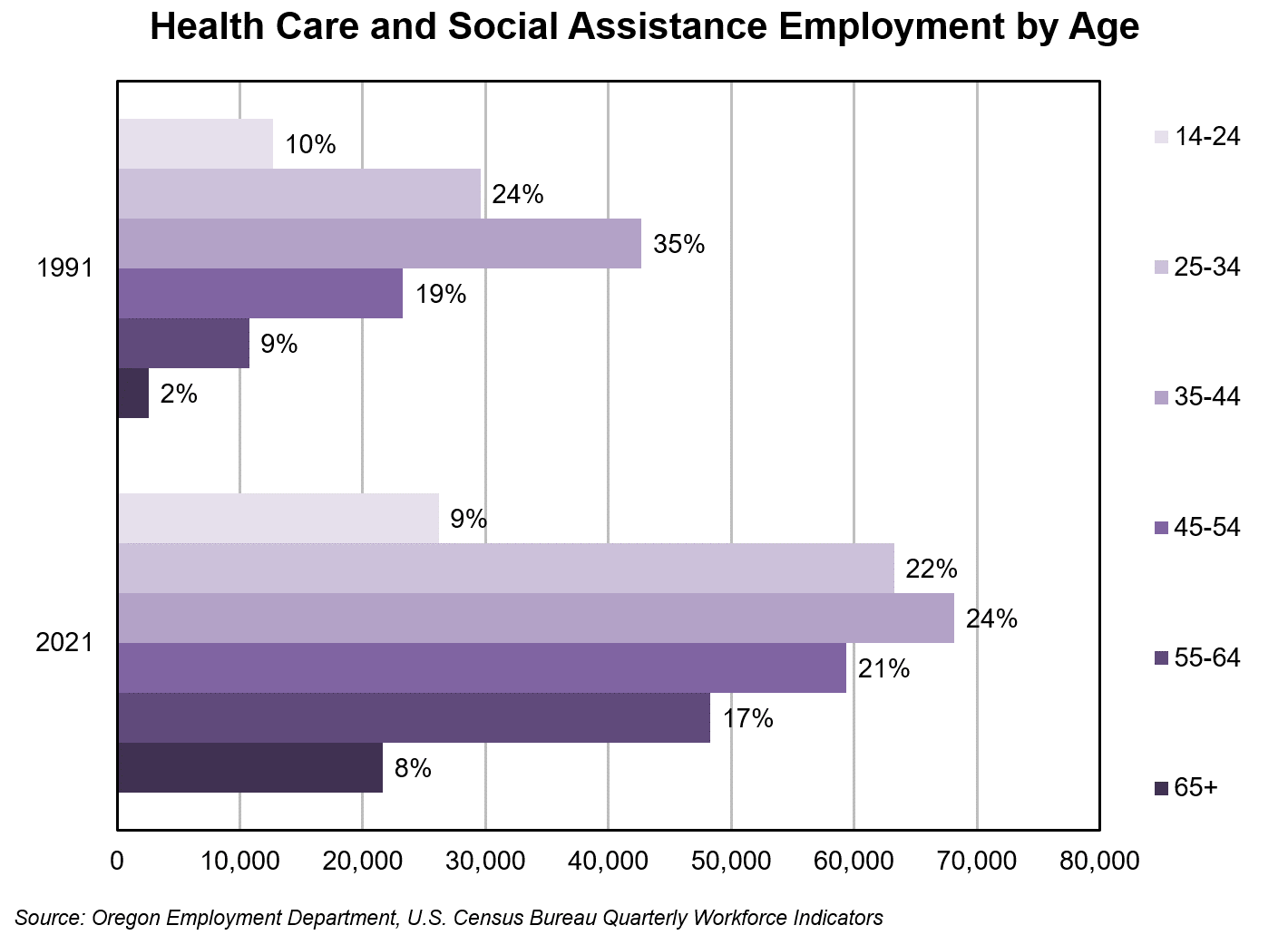 The older health care workforce aligns with trends in the labor force and population overall. The number of workers older than 65 has grown very rapidly, and the labor force participation of young workers, particularly teenagers, has fallen as more young people opt for additional education instead of employment.

It’s no secret that employers are struggling to find workers in the current low unemployment environment. Health care has grown rapidly in recent decades, and consistently tops the list of industries with the most difficult-to-fill job vacancies. Employers in health care know what it means to hire in a tight labor market, and many are striving to be as creative as possible in overcoming gaps.

In this sense, the diversity of the sector is a key tool to combat workforce shortages and better serve patients. By looking at the sector’s makeup, we can judge how well health care employers are accessing all parts of the labor pool. By looking at industry disparities, we can ensure the population benefits equally from job opportunities as well as the care provided by the health care system.