Public elementary and secondary education is a large employer in Oregon. In 2019, before the pandemic, annual average employment in Oregon was roughly 69,000 with a total payroll of $3.3 billion. It was one of the industries most affected by COVID-19 restrictions since people are in close quarters and protecting students and teachers from infection is a high priority.

In April 2020, Oregon schools were physically closed for the rest of the school year due to high levels of COVID-19 infection. The following fall, classes were almost entirely restricted to virtual learning. After being closed for roughly a year and a half, schools reopened for in-class learning under the Ready Schools, Safe Learners Resiliency Framework in the fall of 2021.

Because of the closures, employment at public elementary and secondary schools in Oregon dropped 10,700 jobs between the fall of 2019 and the fall of 2020. During this period, many non-salaried workers such as substitute teachers, cafeteria workers, and bus drivers lost jobs or had hours cut. In addition, retirements continued for both salaried and non-salaried workers. Despite reopening and the resumption of in-class learning in the fall of 2021, employment at public schools in Oregon did not return to pre-COVID levels. As of the fall of 2021, public schools had only regained 72% of the jobs lost in 2020.

As schools were reopening and COVID restrictions were being lifted, employers across the state were having difficulty filling job vacancies as competition for available workers heated up. According to the Oregon Employment Department’s quarterly job vacancy survey, job vacancies for private employers were at a near record level of 102,900 in the fall of 2021 with 76% of those vacancies reported as difficult to fill. Competition for workers caused starting wages to rise. The average starting wage reported in the fall of 2021 was $21.22, a 14% inflation-adjusted increase from fall 2020. Employers in elementary and secondary education were not immune to the labor shortage. With plentiful job openings and higher starting wages workers were able choose and shift to new jobs. 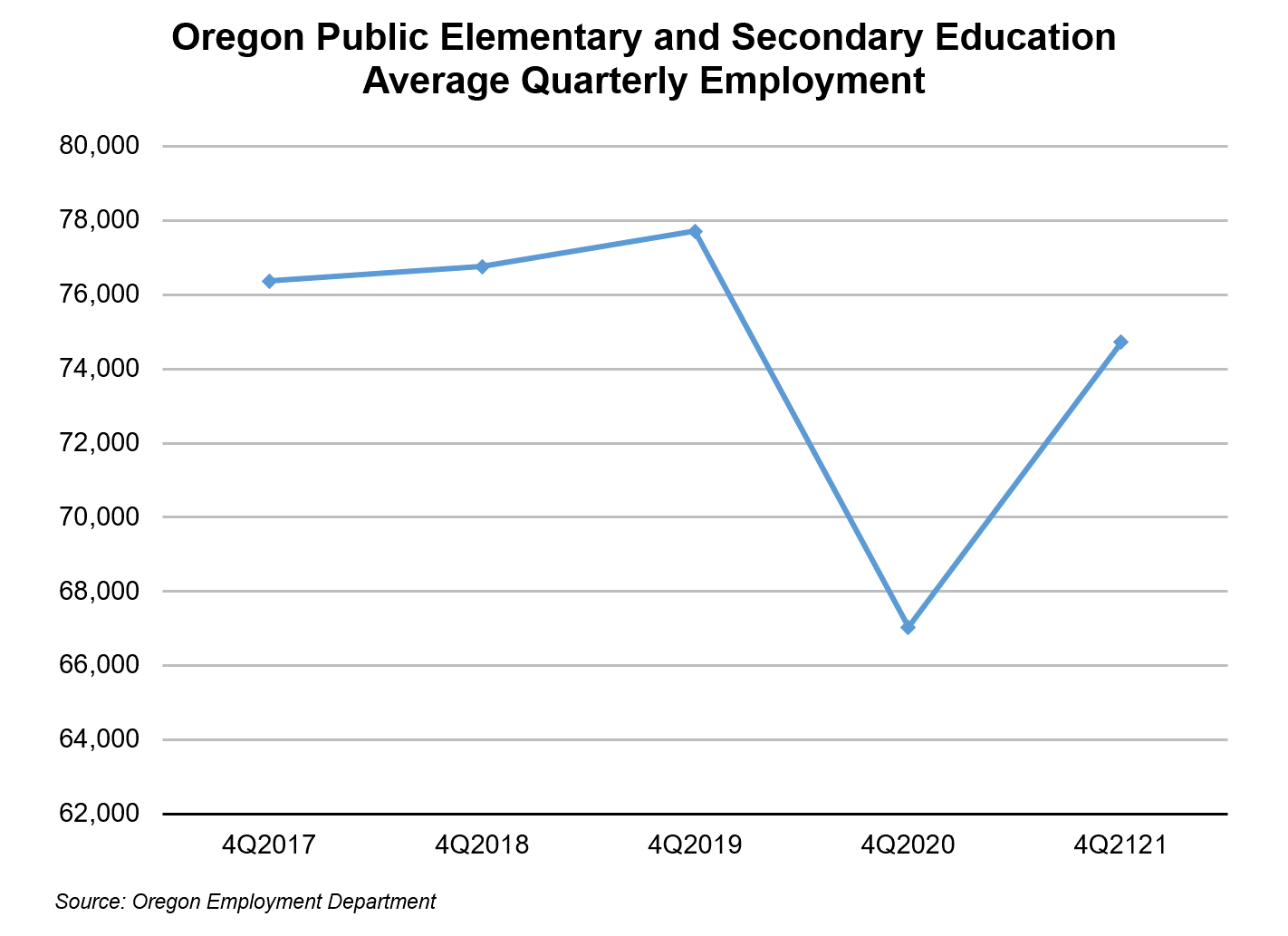 Substitute Teacher and Bus Driver Employment Drops during the Pandemic

There is some difficulty tracking employment gains and losses in public elementary and secondary education since some non-salaried services are employed by the school districts while others are contracted through private-sector companies. One major area of employment loss was substitute teachers. According to the Teacher Standards and Practices Commission of Oregon, in December 2019 there were 8,290 licensed substitute teachers in Oregon. By September 18, 2021, that number was almost cut in half to 4,738, making it one of the major areas of loss at public schools during the pandemic. Although some substitute teachers are contracted and cannot be tracked in our data, many are employed by local school districts and are included.

With the resumption of in-class instruction in the fourth quarter of 2021, schedules at some school districts were not dependable. Due to the lack of staff, especially substitute teachers and bus drivers, sporadic unscheduled closures occurred throughout the state. 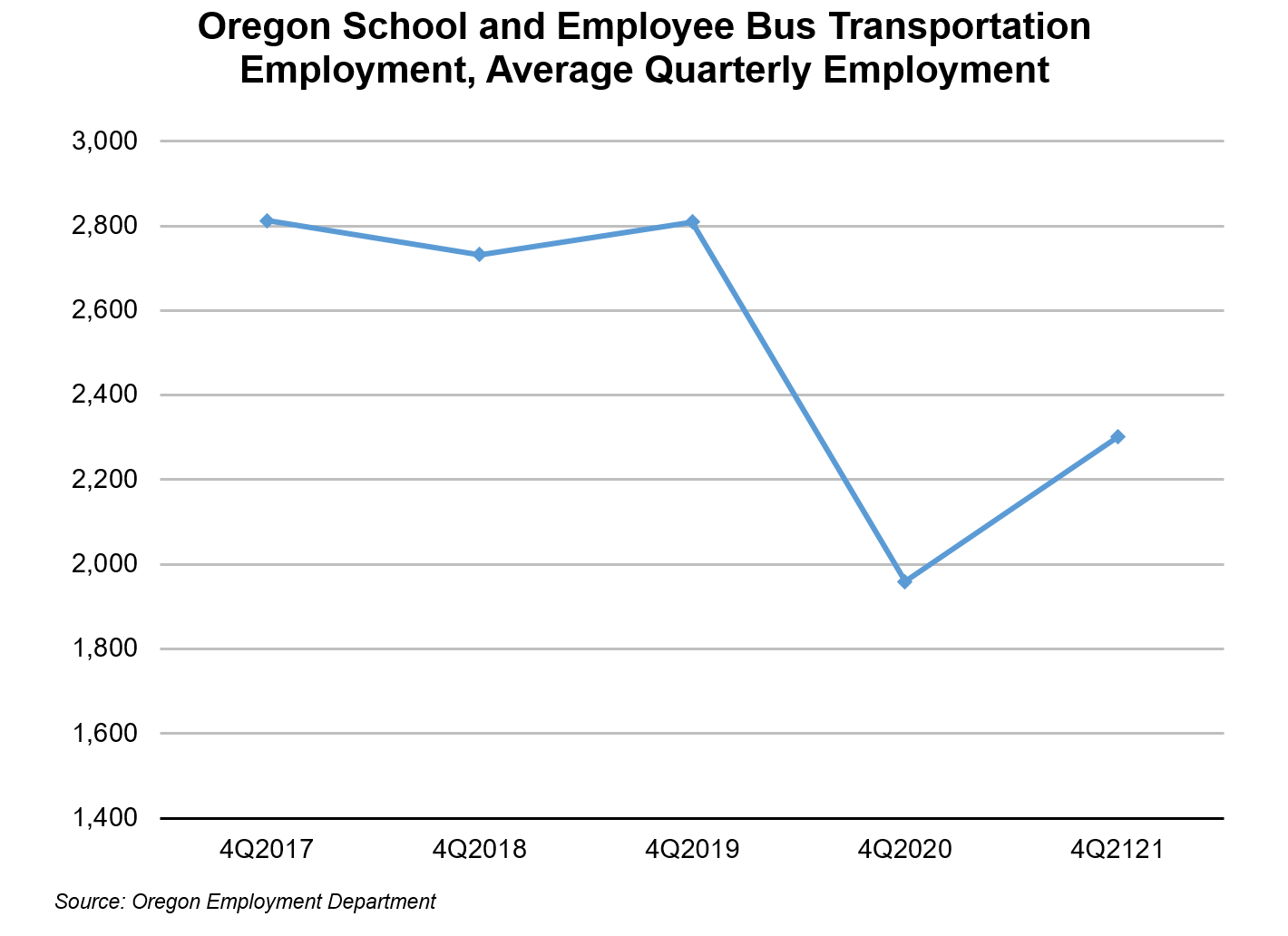 Tracking Workers from Pre-COVID to Reopening

After reopening in the fall of 2021, public elementary and secondary education employment was still down roughly 3,000 jobs from pre-pandemic levels. To find out where these workers went, we tracked the cohort of pre-COVID public elementary and secondary education workers that were employed in the industry in the fourth quarter 2019 through the two years before schools reopened in the fourth quarter of 2021 using wage records and unemployment insurance (UI) claims. If an Oregon establishment reported payroll earnings for a worker or a worker was on an Oregon UI claim, that worker showed up in our data. Other workers either dropped out of the labor force or left the state. 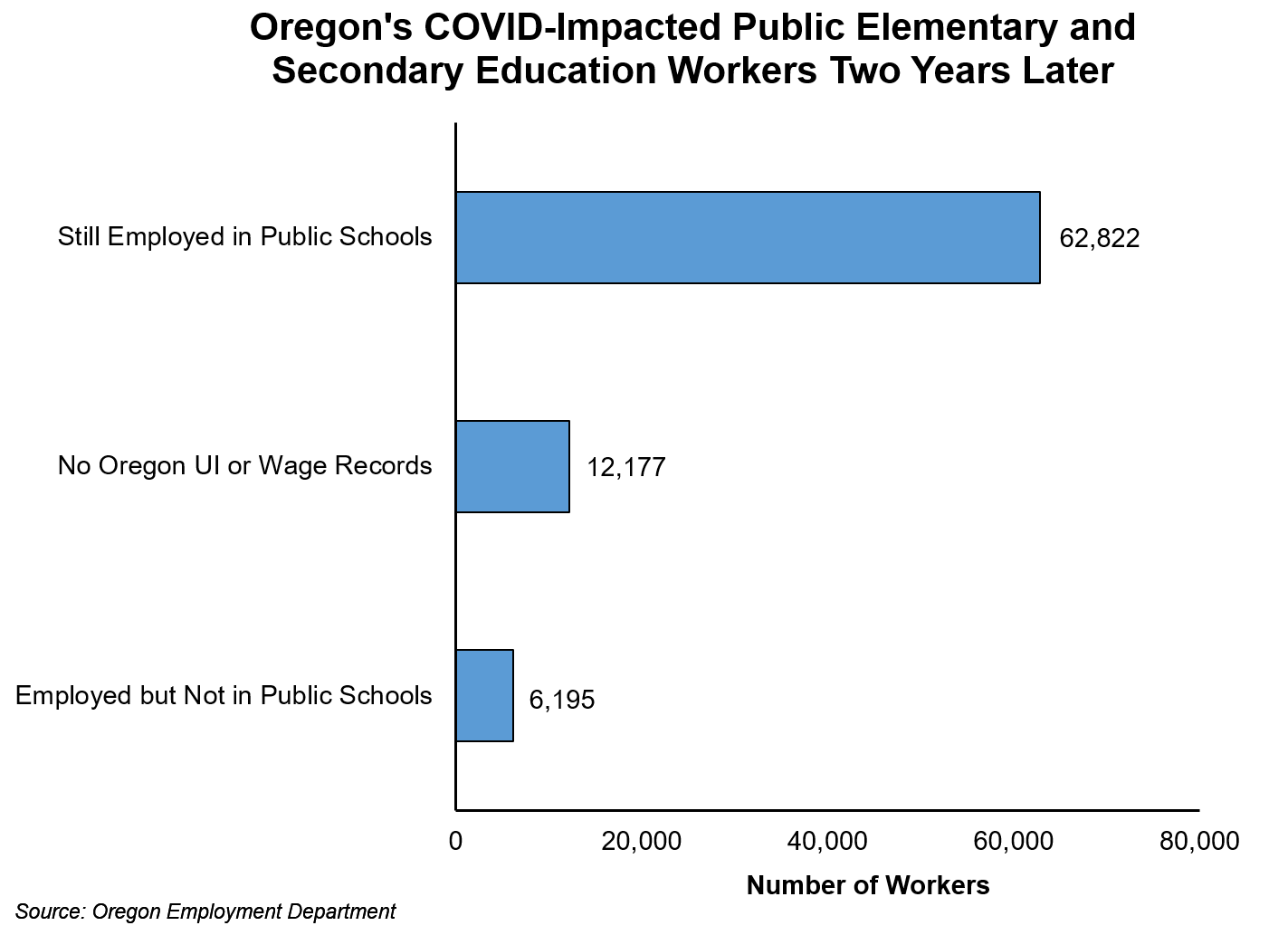 The analysis shows that nearly one out of 10 (9%) or 6,195 public school workers who remained employed in Oregon in the fourth quarter 2021 shifted their industry of highest earnings. The largest shares moved to jobs in health care and social assistance (1.7%); professional and business services (1.2%); and public administration (1.1%). There are several reasons for educators to switch to another industry. According to a survey of National Education Association members, some of the issues facing educators are stress from the coronavirus pandemic, student absences due to COVID-19, more work from unfilled job openings, low pay, and student behavior issues. 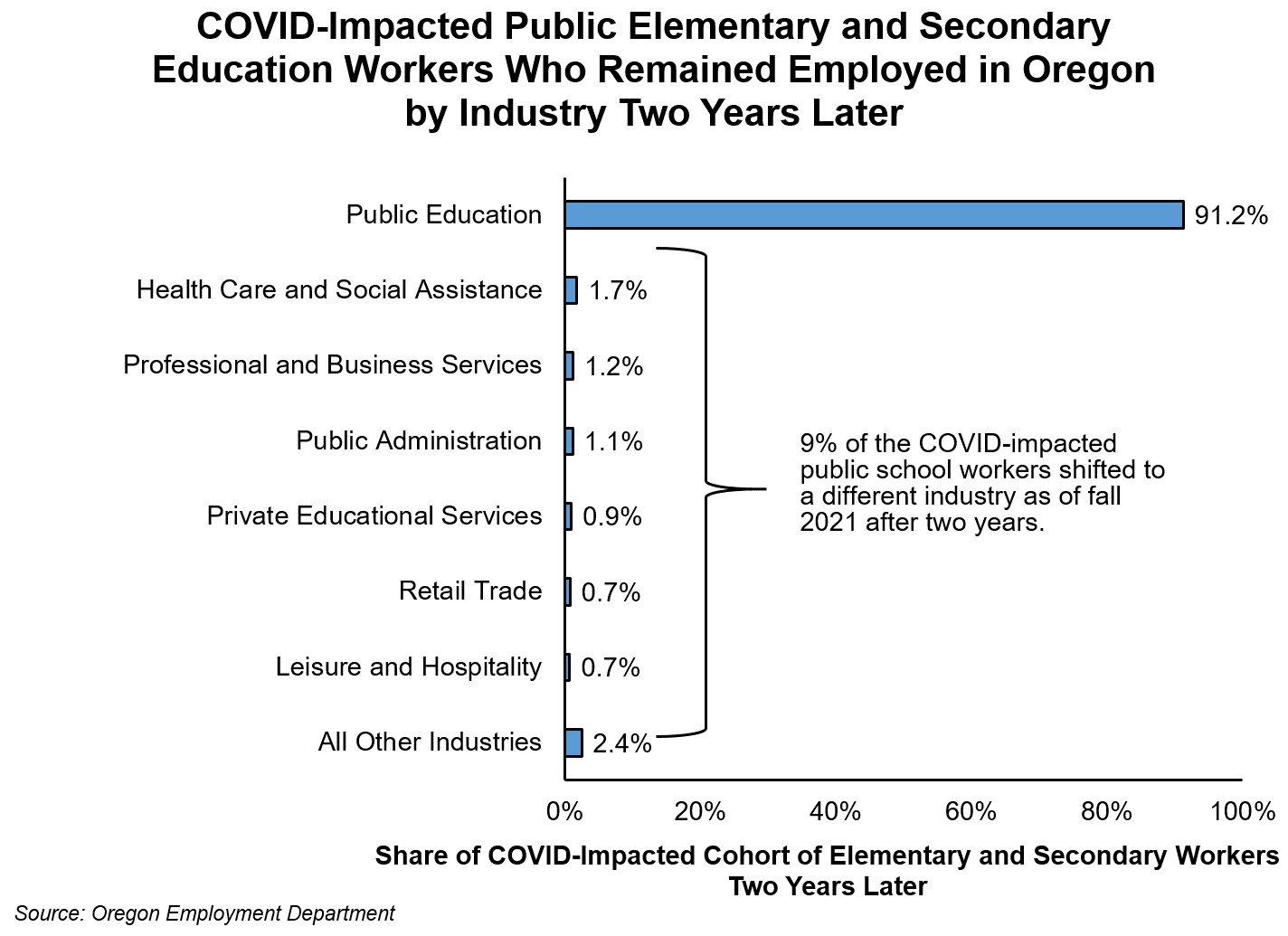 A look at unemployment insurance benefits data shows that there was a small increase in the number of workers not in the wage file but that had a UI claim from 104 in the 2017 cohort to 147 in 2019 cohort. The small increase is to be expected considering the high level of workers collecting unemployment benefits just months before the reopening of schools. However, it does not account for the additional 1,887 workers not in the wage file or collecting UI benefits in the 2019 cohort.

For those who did not leave the state, there are many reasons to drop out of the labor force. One of the most prevalent reasons is retirement, which likely makes up a large portion of the workers not in the wage file or collecting UI benefits. The NEA poll cited above shows that nationally, members who said they were more likely to retire or leave early because of COVID-19 grew from 28% in July 2020 to 55% in November 2021. Oregon Public Employee Retirement System data shows that roughly 40% of the 47,345 active members eligible to retire in 2019 worked in school districts. In addition, the education services industry in Oregon has an older workforce with 29% of workers above the age of 55 compared with 24% for all industries, making losses due to retirement more likely in public elementary and secondary education. 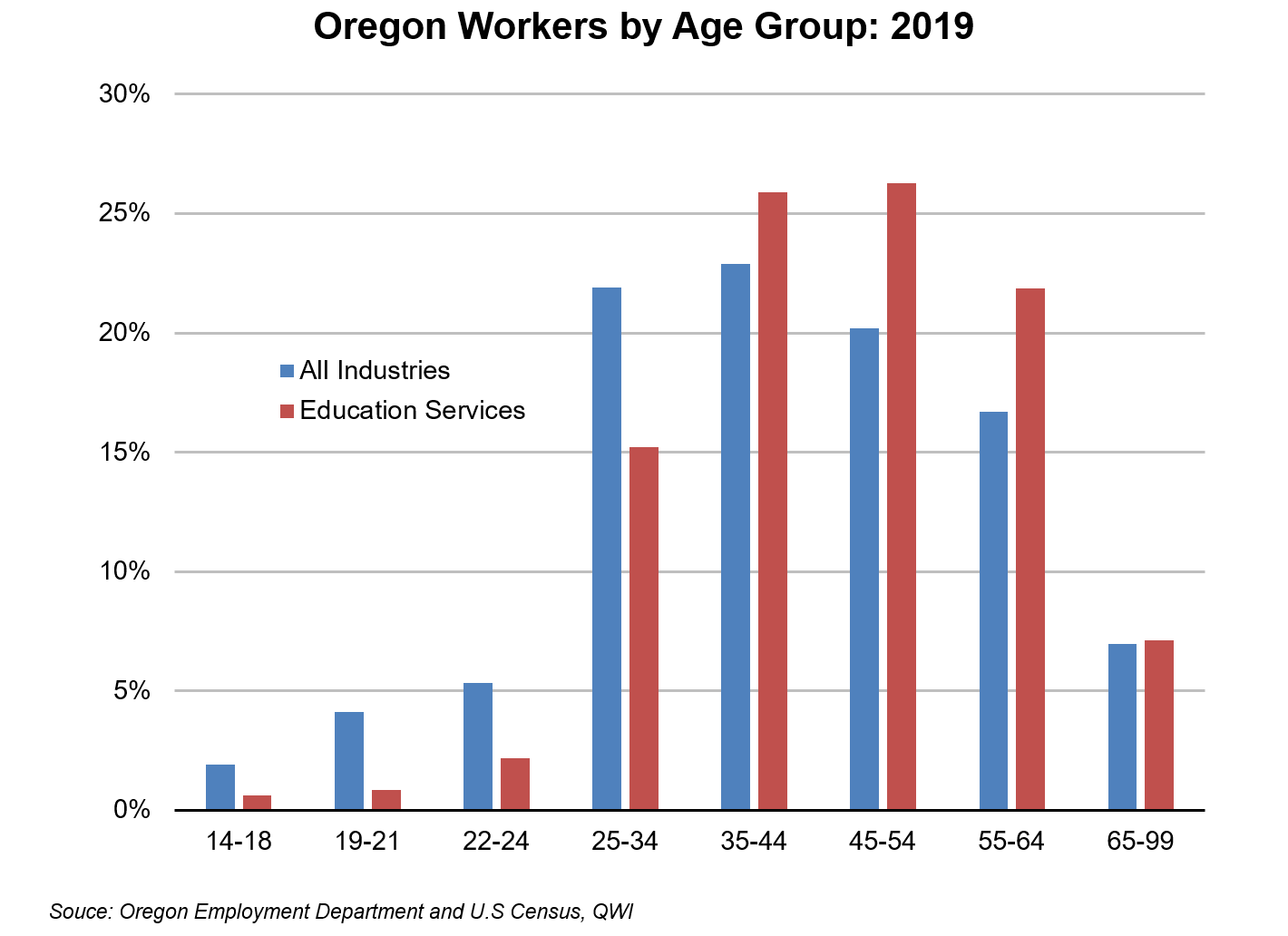 Another prevalent reason to drop out of the labor force during the pandemic was child care. During the 2020-2021 school year, when there was almost no in-class instruction, a lack of child care became an issue, forcing some parents, including public elementary and secondary education workers, out of the labor force to care for children at home. A survey by RAND in early 2021 showed that one out of three elementary and secondary school teachers were responsible for the care of their own children while teaching, adding to stress and the likelihood of leaving their job.

We can also track workers from school and employee bus transportation. The results are markedly different from public elementary and secondary school employment in that only 76% of the 2019 cohort that remained employed were still in school and employee bus transportation in the fall of 2021. This result makes sense since many of these nonsalaried workers were laid off and went on to find jobs in other industries whereas public elementary and secondary schools have more salaried workers who stayed in their jobs.

The industries that school bus drivers shifted to include transportation, warehousing, and utilities (4.0%); health care and social assistance (3.7%); and all other educational services. Workers were able to use their experience as bus drivers to transition to new jobs. Those that shifted to all other educational services likely found a job at a school district driving bus.

Bus drivers saw an increase in those that that were not in the wage file from 570 for the 2017 cohort to 749 for the 2019 cohort. There were only 20 workers collecting UI benefits in the fourth quarter of 2021. Many of the same reasons for dropping out of the labor force that affect educators also affect bus drivers. 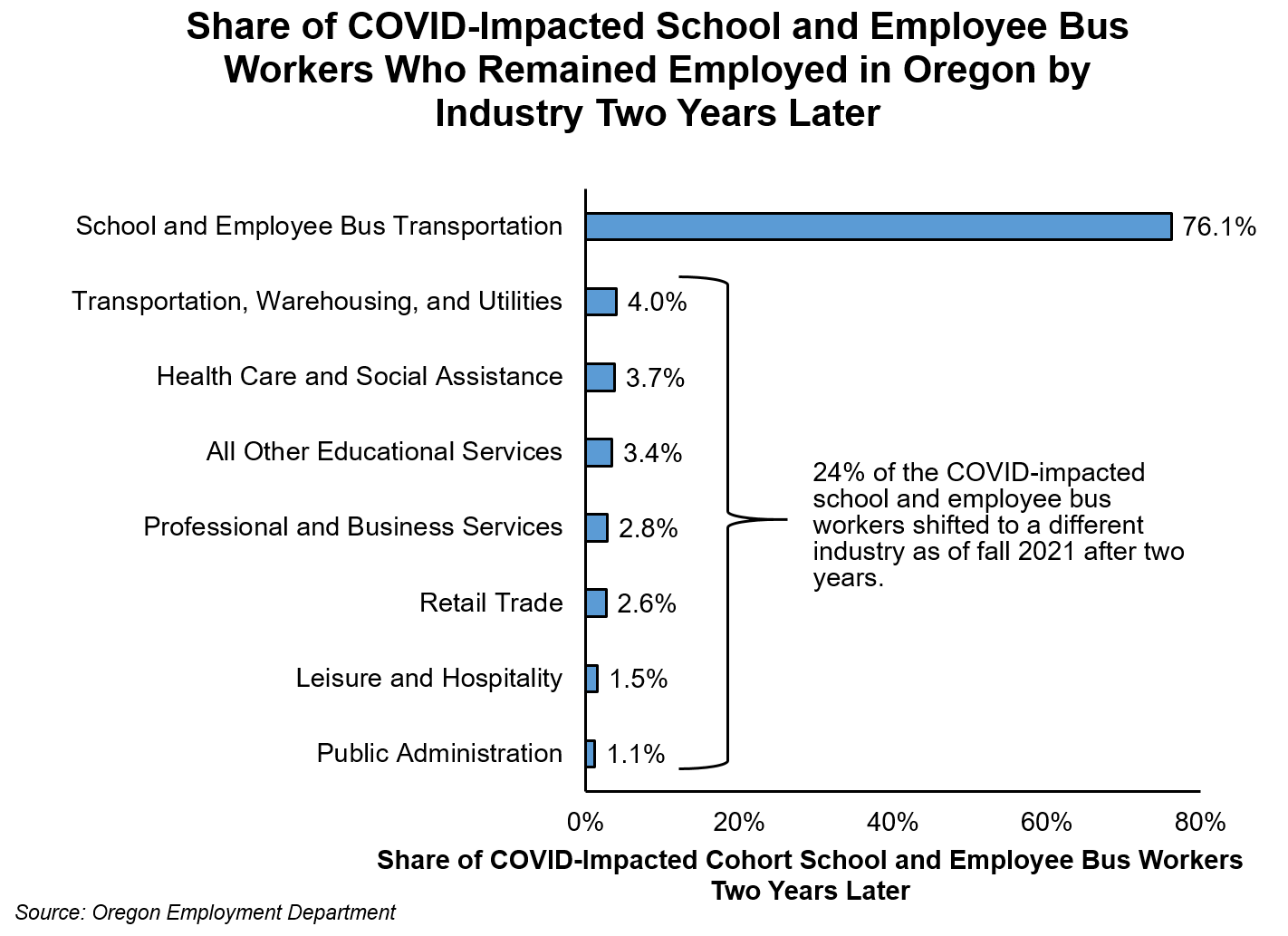