Enrollment in higher education is largely counter-cyclical. Enrollment tends to soar during periods of recession and drop during expansions. A historically long economic expansion ended in spring 2020 as both the nation and state of Oregon fell into the COVID-19 pandemic recession driven by public health measures to slow the spread of the disease. As the state of Oregon remains in recovery phase from this pandemic recession we would expect to see enrollment up as unemployment remains above pre-pandemic levels. However, the combination of ongoing COVID-19 concerns and a very tight labor market have not led to the normal counter-cyclical enrollment bump typically seen during recession. Across Oregon’s seven universities and numerous campuses full-time equivalent (FTE) enrollment in fall term 2021 was largely unchanged from 2020 (-1%), but remained down 4.8% from fall term 2019.

Enrollment across Oregon’s seven public universities grew rapidly as we entered the last recession in 2008. The increase in enrollment corresponded with a spike in unemployed Oregonians. It is a common pattern for people who lose a job to go back to school during tough economic times in order to receive education and training for a new career. The number of unemployed Oregonians peaked in 2009 and had been declining until the onset of the COVID-19 pandemic in spring 2020. The number of unemployed rose dramatically from around 75,000 Oregonians before the pandemic to over 270,000 in April 2020. Around 150,000 were unemployed by the beginning of the 2020-2021 school year, but only around 95,000 by the beginning of this most recent school year. Unlike in previous recessions, this spike in unemployed did not lead to a corresponding increase in enrollment in Oregon’s public universities. In fact, most of the public universities posted sizable drops in enrollment with little improvement this year. 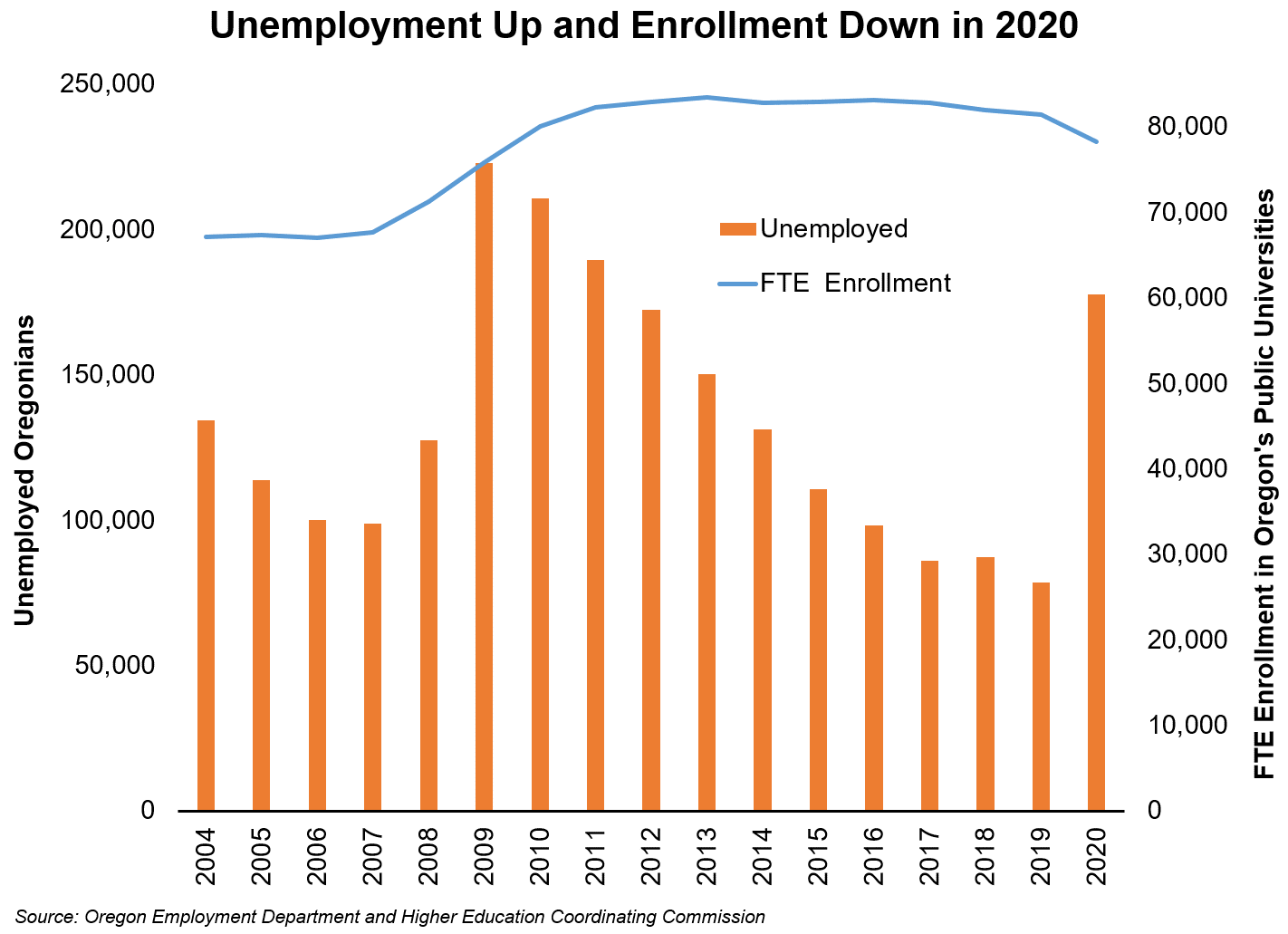 In a normal recession this would be a shocking trend, but not in the bizarre 2020-2021 and 2021-2022 school years. The COVID-19 recession was driven by a pandemic shock. The spike in unemployed was largely the result of stay-at-home orders, closures, and restrictions on certain types of businesses, such as indoor dining. These restrictions and other public health recommendations temporarily shifted consumer spending away from typical leisure activities. Temporary being a key element of this demand shock. As we have begun to live with the public health crisis those industries most impacted are beginning to return to some semblance of normalcy.

This recession didn’t result in a skills mismatch or structural decline that would drive workers back to school to skill up for a new career. Additionally, many students likely postponed their college enrollment due to concerns over the safety of in-person instruction or concern about the quality of the alternative, online instruction. Prospective students were also likely drawn away from higher education due to the high demand for labor and notable wage gains over the past year. Finally, travel restrictions likely impacted international student enrollment that had been trending up before the pandemic. Together these trends likely explain the atypical drop in enrollment in the midst of a recession. 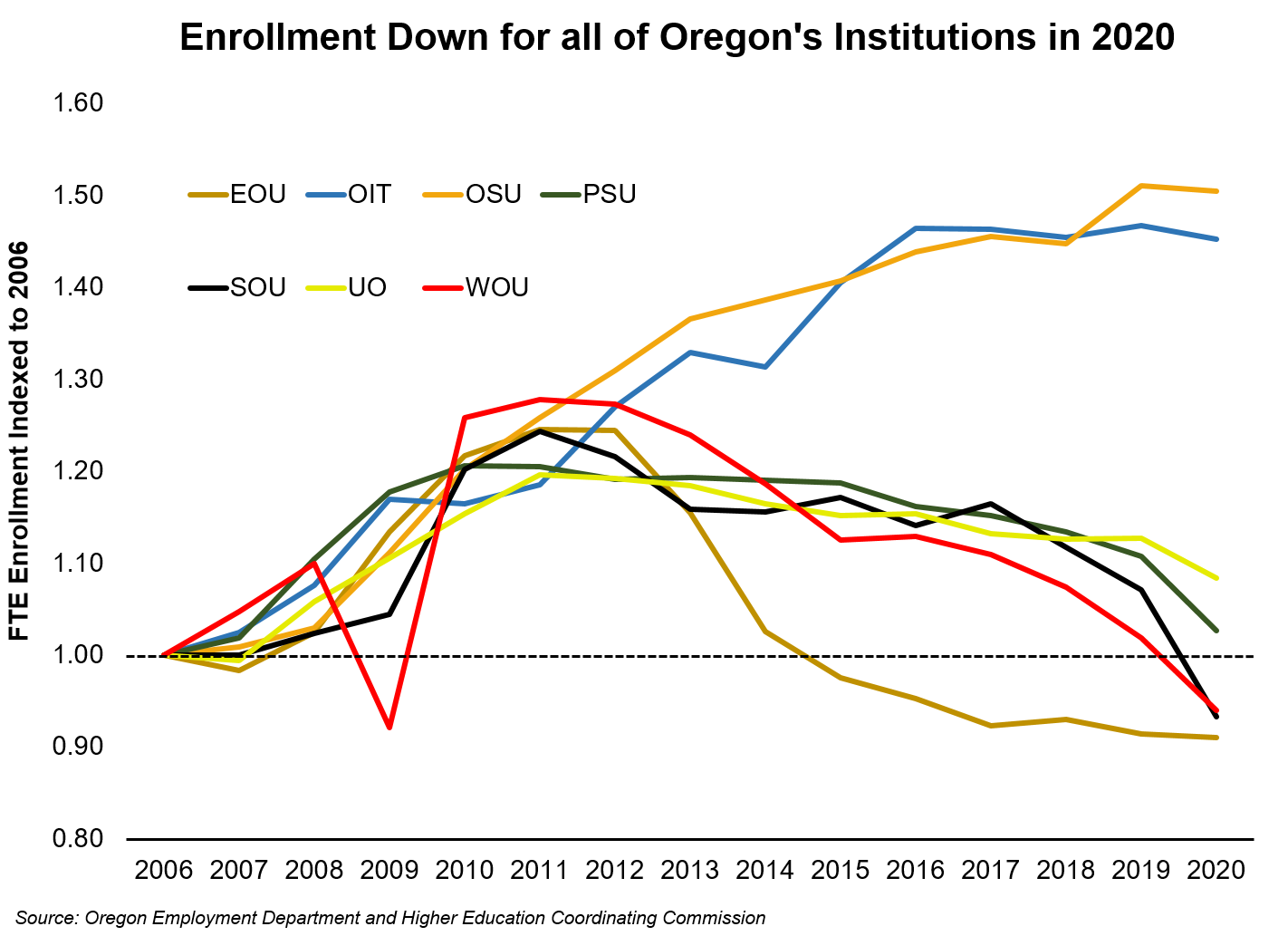 Non-resident Enrollment Is Up 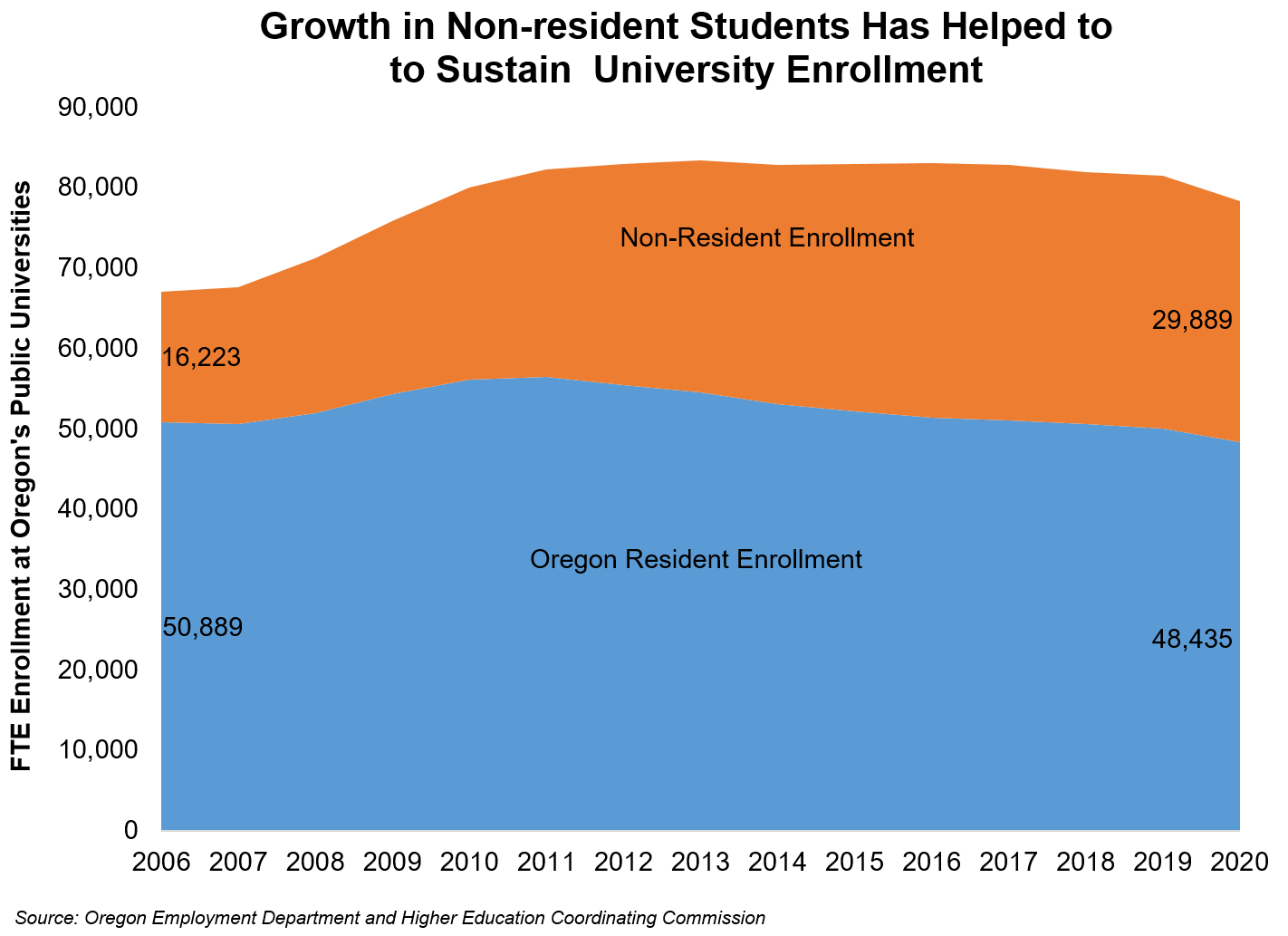 Non-resident enrollment was down 5% in 2020, the first notable drop in the past decade. In fact, the enrollment loss from non-residents was slightly larger than the drop in resident enrollment. Many of these enrollments losses are likely temporary and tied to the pandemic, as well as a decline in international students attending institutions of higher learning across the United States. In 2021 there was only a modest rebound in non-resident enrollment up just 1.4% from 2020 levels and still remaining 3.7% below pre-COVID levels in 2019.

Looking ahead, population trends point to steady, though likely quite slow, enrollment growth for higher education over the next 10 years. The college-age population is expected to grow at a slow pace over the next decade. Portland State University’s population forecast from 2020-2030 estimates the population of young people 15-24 will expand by roughly 4.3%, less than 0.5% annually.

Industry and occupational trends do not point to a need for a dramatic increase in the educational attainment of Oregon’s workforce. Based on the most recent employment projections by the Oregon Employment Department, the share of all jobs in Oregon that will require a bachelor’s degree or higher in the next decade is largely unchanged from today.

How economic conditions will impact enrollment over the coming years is more of an unknown. If we continue to see our fast and robust recovery, then the counter-cyclical enrollment bump universities typically get during recessionary periods is highly unlikely.