In Cod (And Crab!) We Trust – Oregon’s Seafood Processing Industry

In 2021, Oregon had 34 employers and 1,084 employees turning slimy fish and armored crustaceans into succulent seafood ready for cooking and eating. This was fewer employees than in recent years, though the number of employers has been pretty steady.

Commercial fishers landed about 318 million pounds of fish and shellfish in Oregon in 2021, about 75 pounds per Oregonian. Nearly 60% of this volume consisted of whiting, mostly used to make surimi. Total harvests had a dockside value of $206 million, an increase of 29% from the year before. Fishermen sold a small portion of the harvest off their vessels or at markets directly to consumers. Most, however, was sold to processors and buyers then exported or sold to wholesalers, retailers, restaurants and consumers.

The seafood processing industry – part of the manufacturing sector – includes businesses that clean, freeze, can, smoke, salt, and dry seafood. It also includes firms that shuck and pack shellfish. Although Oregon currently doesn’t have any, it also would include processor ships that do these operations at sea. Except for certain fishermen licensed to sell fresh fish from their boats, the Oregon Department of Fish and Wildlife requires commercial fishers to sell their harvest to licensed wholesale fish dealers or licensed fish buyers. Many of these dealers and buyers are also processors.

Oregon exported $49.3 million worth of fish, crustaceans, and aquatic invertebrates in 2021, according to the U.S. Census Bureau. Canada was by far the leading foreign destination, taking 44% of all exports. Japan, Nigeria, China, and Ukraine were other major destinations. Exports to China fell by 45% in 2021 from 2020. Canada took a lot of Dungeness crab and whole and filleted fish, both fresh and frozen. Japan took a mix of fish fillets and whole fish. China got primarily mollusks, such as shellfish or squid. Nigeria and Ukraine received whole frozen fish almost exclusively. About one-third of seafood exports are as whole frozen fish, presumably with further processing done in the destination country.

The number of seafood processing businesses had been slowly declining since 2007, but that trend reversed in 2015. Oregon’s processing industry gained five businesses that year. Since 2014 Oregon has added 11 seafood processing operations. But the trend toward more consolidation may continue. Pacific Seafood has moved to operate a Trident Seafood plant in Newport, leaving just two main seafood processors in the busy port town. Just a few processors account for most of the large facilities in Oregon. Consolidation has also occurred in the Oregon fishing fleet. Three ports: Astoria, Newport, and Charleston, had about 79% of all commercial fish landings by value in Oregon in 2021. Smaller ports like Garibaldi, Depoe Bay, and Florence struggle to find money for infrastructure, dredging, and jetty maintenance that can attract vessel owners and seafood processors.
Employment Trends in Seafood Processing

The seafood processing industry fared relatively well during the Great Recession, but the pandemic recession seems to have led to some employment loss. Annual average employment fell by 145 jobs in 2020, and then fell again in 2021 by 109 jobs. Over those two years employment dropped 19%. Although employment in seafood processing often fluctuates from year to year, the job losses associated with the pandemic recession are larger than others in recent years. Some facilities closed temporarily due to COVID-19 outbreaks, and this along with a tight labor market may have had longer-term impacts on their ability to attract workers. Another possible explanation for lower industry employment is that facilities may have increased their use of employment agencies to get workers. These workers have their employment recorded in a different industry. 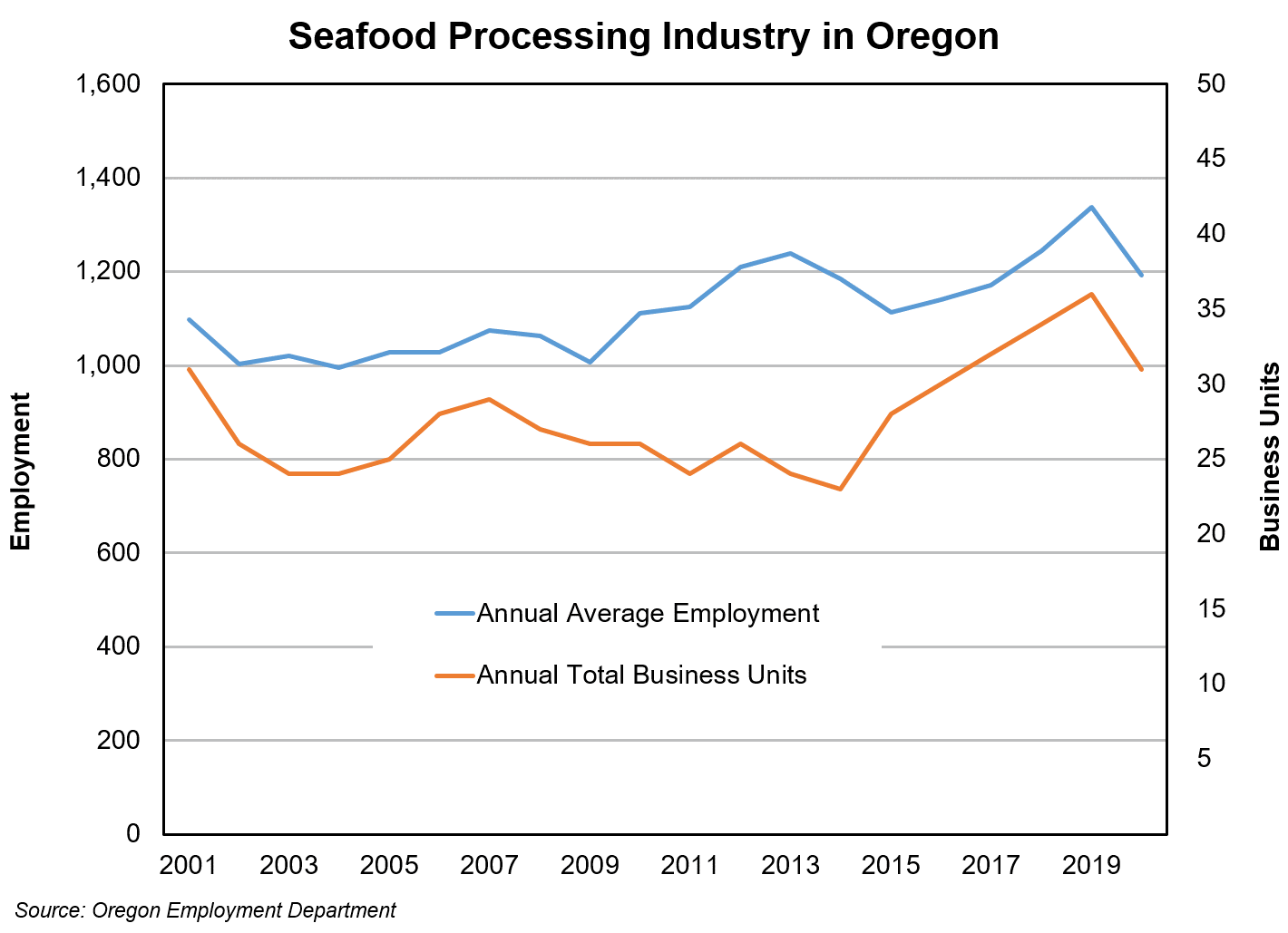 Employment in seafood processing tends to be fairly seasonal. It usually peaks in midsummer and hits its low point in March. Much of the industry’s employment depends directly on when fish are landed. This in turn depends on weather, ocean conditions, fish life cycles, and regulations, especially those established by the Pacific Fishery Management Council. This council has the authority to open and close many fisheries important to Oregon. 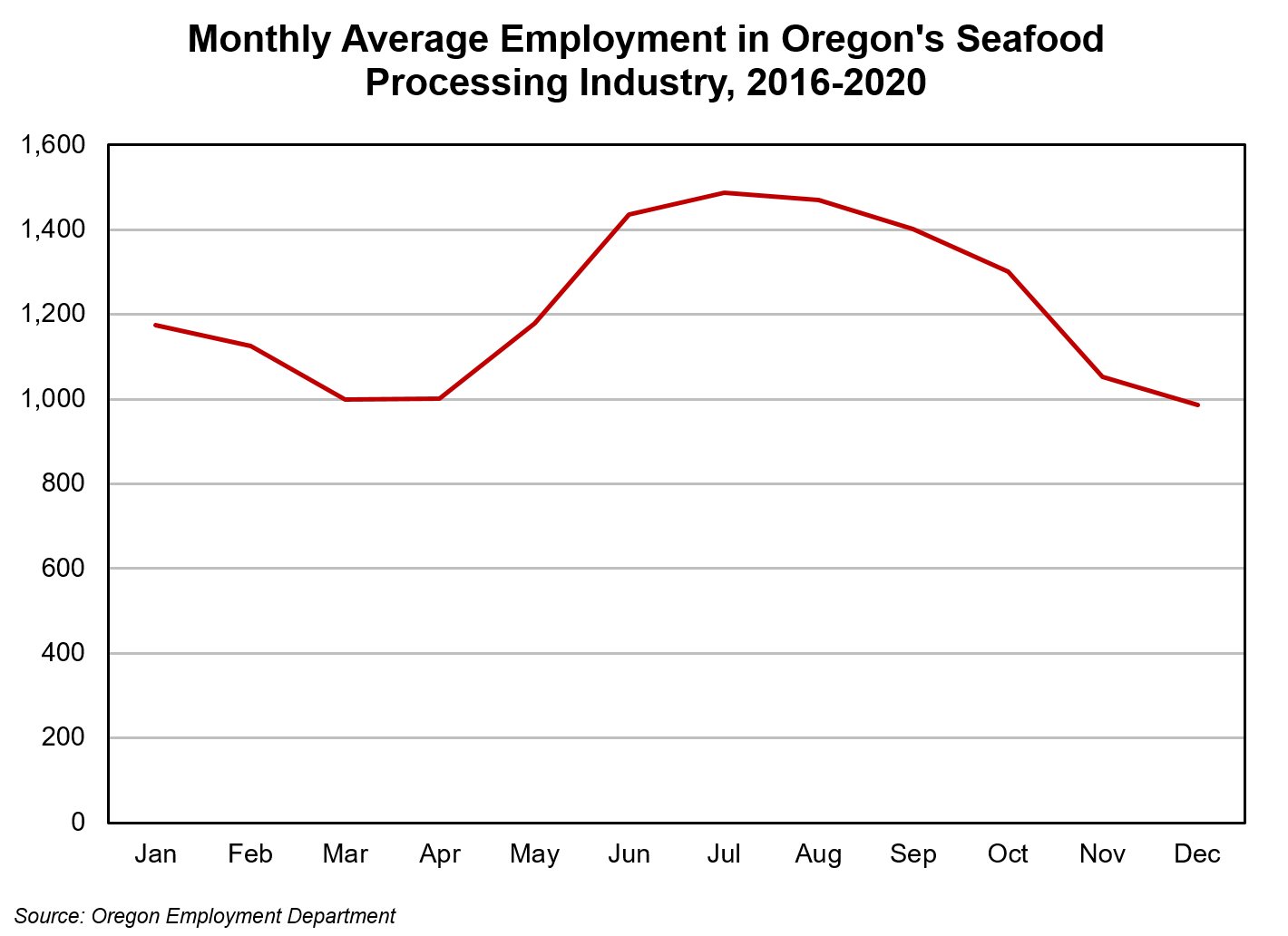 The summer employment peak coincides not only with better fishing weather, but increased availability of fish. Tuna, salmon, and especially Pacific whiting, are all available in the summer. Pacific whiting, also called hake, is typically Oregon’s largest fishery by volume. A little more than 184 million pounds were landed in 2021. (On the other hand, because it was plentiful it fetched only fifty cents per pound when landed.) Whiting is used to make surimi, which in turn is used to make imitation “crab” or “lobster” meat. Manufacturing surimi requires a good deal of very controlled processing and rapid cleaning and handling of the fish. This means that surimi processors must hire many seasonal employees.

Another, smaller, peak in seafood processing employment typically occurs in December and January. Although the weather is often dangerously bad at this time, December is usually the beginning of the Dungeness crab harvest. Crab is often Oregon’s most valuable single fishery, and 2021 was a great year for crab. More than 24 million pounds were landed in 2021 with a value of $120 million. In contrast to inexpensive whiting, Dungeness crab fetched nearly $5.00 per pound. The crab harvest is a derby fishery; it’s first come, first served as boats and crews race to scoop up as much as they can before someone else does. The result is a glut of crab landing on processors’ docks that must be cleaned, cooked, picked, and frozen in short order. Seasonal employees allow processors to get through the short-lived crab bonanza.

The skill requirements are modest for many seafood processing jobs. Line jobs are generally entry level. Applicants often must pass a drug screening test and a criminal background check. The work is often 12-hour shifts, seven days per week during the busy seasons. The demand for workers in tight labor and housing markets make it difficult if not impossible to find enough local workers. Accordingly, companies often recruit from out the area and help provide or arrange transportation and housing. Overtime is a part of the job and the base pay is often close to minimum wage. Other jobs with processors, such as truck drivers and quality inspectors, require more skill and pay more.

Oregon has a number of businesses that handle and process seafood aside from the major processors. If seafood processing is a sideline for a business, it may be counted in another industry because businesses are categorized according to their main operation. There are a handful of oyster farms along the coast that shuck and package oysters, although their main business is farming the oysters. Oregon Oyster Farms in Newport and Clausen Oysters in North Bend grow oysters and ship them worldwide.

Other firms that distribute seafood or sell wholesale or retail may also do some processing. The Garibaldi Cannery on Tillamook Bay is one such multi-purpose firm. The company does processing, buying, and retail and helps keep the port at Garibaldi an active fishing port. Small firms are more common for salmon and albacore tuna. The websites for the Oregon Albacore Commission and the Oregon Salmon Commission each list several dozen firms that handle these seafood products and provide canned, frozen, and fresh fish.

Some seafood processors recruit Oregonians to work in out-of-state plants, primarily in Alaska during the summer months. Companies such as Trident Seafoods, Signature Seafoods, and Ocean Beauty routinely recruit employees for their Alaska operations. Although the jobs may be listed in Oregon, out-of-state jobs don’t count as official Oregon employment and are not included in this analysis.

The Alaska processing work is similar to that in Oregon: few skill or experience requirements, working on a processing line, 12- to 16-hour days, seven days per week. The difference is the geographic isolation. Many Alaska facilities are in remote locations and employees live in dormitory style housing in company towns.