Through the past several decades and into the recovery from the COVID-19 pandemic recession, the nonmetro and metro areas of Oregon have experienced very different economic trends. In Oregon, statewide unemployment rate trends are tightly tied to trends in the metro areas and in particular, to Oregon’s most populated counties in the Portland metro area. When we break out the unemployment rate of nonmetro and metro areas, we can see how economic experiences vary across the state. When we break the data down by county, we can see an even greater variety of economic experiences.

For this analysis, “metro” is the group of 13 counties that make up Oregon’s eight Metropolitan Statistical Areas (MSAs) and “nonmetro” is the group of 23 remaining counties. MSAs are defined as having at least one urbanized area of 50,000 or more inhabitants and its surrounding county or counties based on population and commuting patterns.

The MSA definition is used due to the breadth of information available at the county level but it is not a perfect representation of Oregon’s urban economies. While it encompasses Oregon’s most urban areas, many counties defined as metro are very rural in character outside of city limits, so some rural attributes are included in metro areas.

There are several possible reasons the nonmetro unemployment rate is higher:

The subsequent Great Recession caused the gap to widen somewhat as metro unemployment rates remained higher for a longer time during recovery. By 2012, the gap had widened to 2 percentage points. The recovery from the Great Recession was one of the longest in history and both nonmentro and metro Oregon reached record low unemployment rates in late 2019. The gap once again narrowed to about 1 percentage point. One possible reason the gap narrowed may be that nonmetro counties generally have older populations than metro counties and retirements can keep unemployment rates down since, when people retire, they are not counted as unemployed but often leave an opening that needs to be filled. 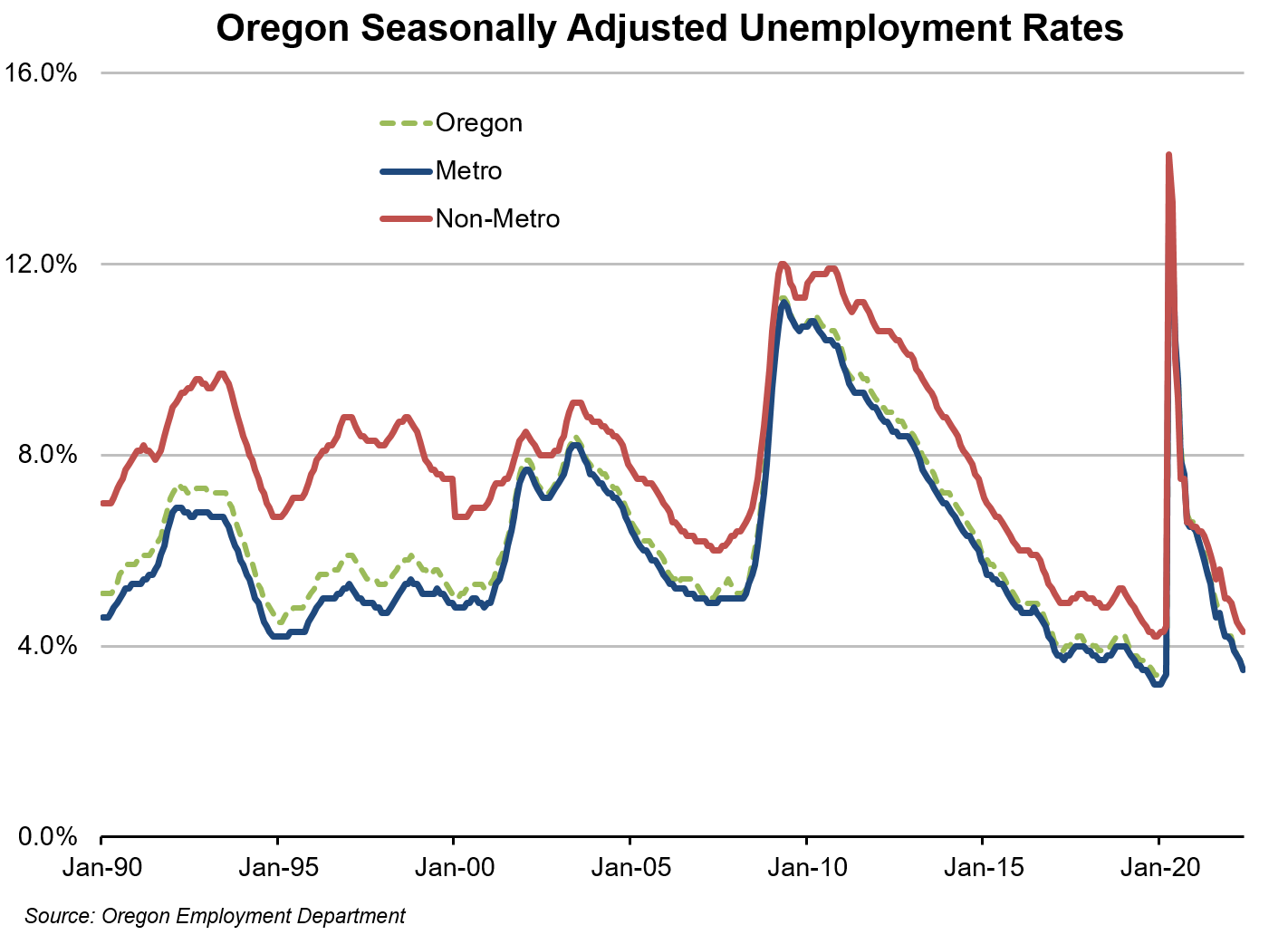 In late February 2020, Oregon had its first presumptive case of COVID-19. Confirmed cases mounted rapidly and on March 23, the governor declared a statewide stay-at-home order. The order expanded the list of businesses forced to close to those “for which close personal contact is difficult or impossible to avoid,” including gyms, gift shops, malls, senior centers and theaters, among others. Restaurants and bars had been closed by a previous order except for take-out orders. Because of the closures, both nonmetro and metro areas reached record high unemployment rates in April 2020 of 14.3% and 12.8%, respectively.

On May 7, the governor released details on a three-phase reopening centered on counties. Counties would have to meet metrics based on testing, tracing, and declining COVID-19 cases. The first phase allowed restaurants and bars to open for dine-in. Personal services such as hairdressers and fitness centers and stand-alone retail were allowed to reopen contingent upon compliance with state guidelines.

On May 15, 31 of Oregon’s 36 counties were allowed to enter Phase 1. Oregon’s largest counties – Multnomah, Clackamas, and Washington – had yet to apply and the Salem MSA counties of Marion and Polk were initially denied. 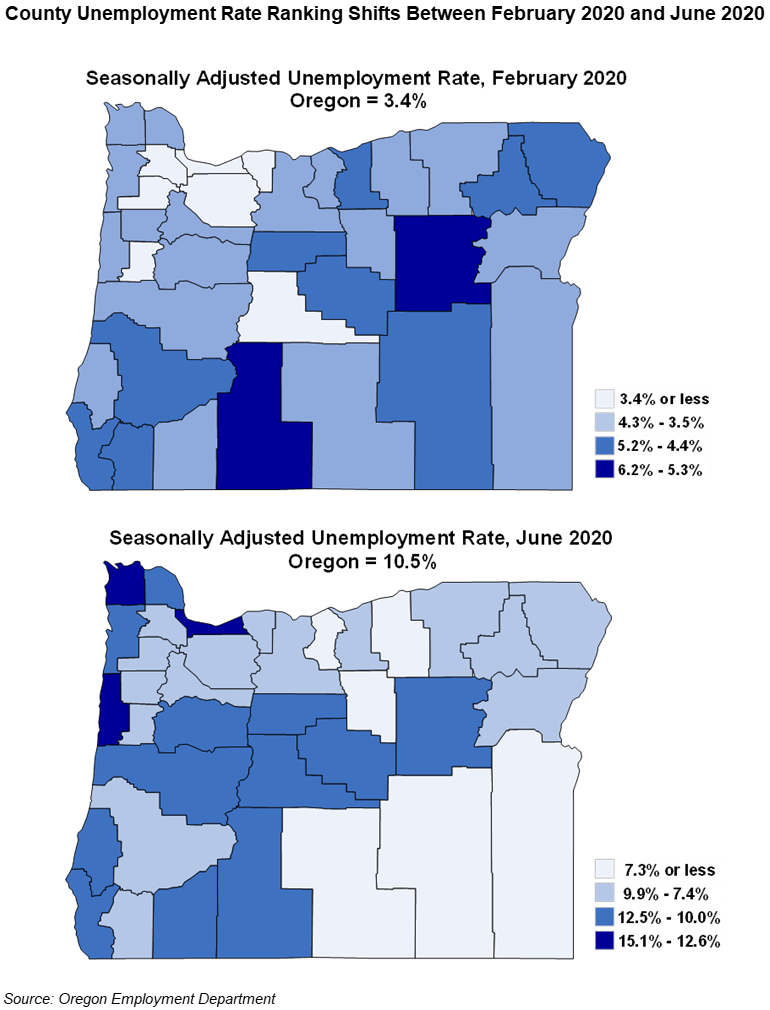 Metro unemployment rates remained elevated into the second half of 2020 for several reasons. First, the delayed opening of counties in the Portland and Salem metro areas kept employment growth down. Second, the Corvallis and Lane metro areas are home to major universities that were affected by school closures and a switch to virtual learning. Finally, the Bend metro area has a large concentration of employment in the leisure and hospitality industry, causing it to have a large unemployment rate increase. Meanwhile, all nonmetro areas were reopening. The nonmetro counties on the coast with high unemployment rates have relatively small labor forces that have little effect on the overall nonmetro rate. Because of this dynamic, in the second half of 2020, the nonmetro unemployment rate was lower than the metro rate for the first time in the history of the data, which began in 1990. 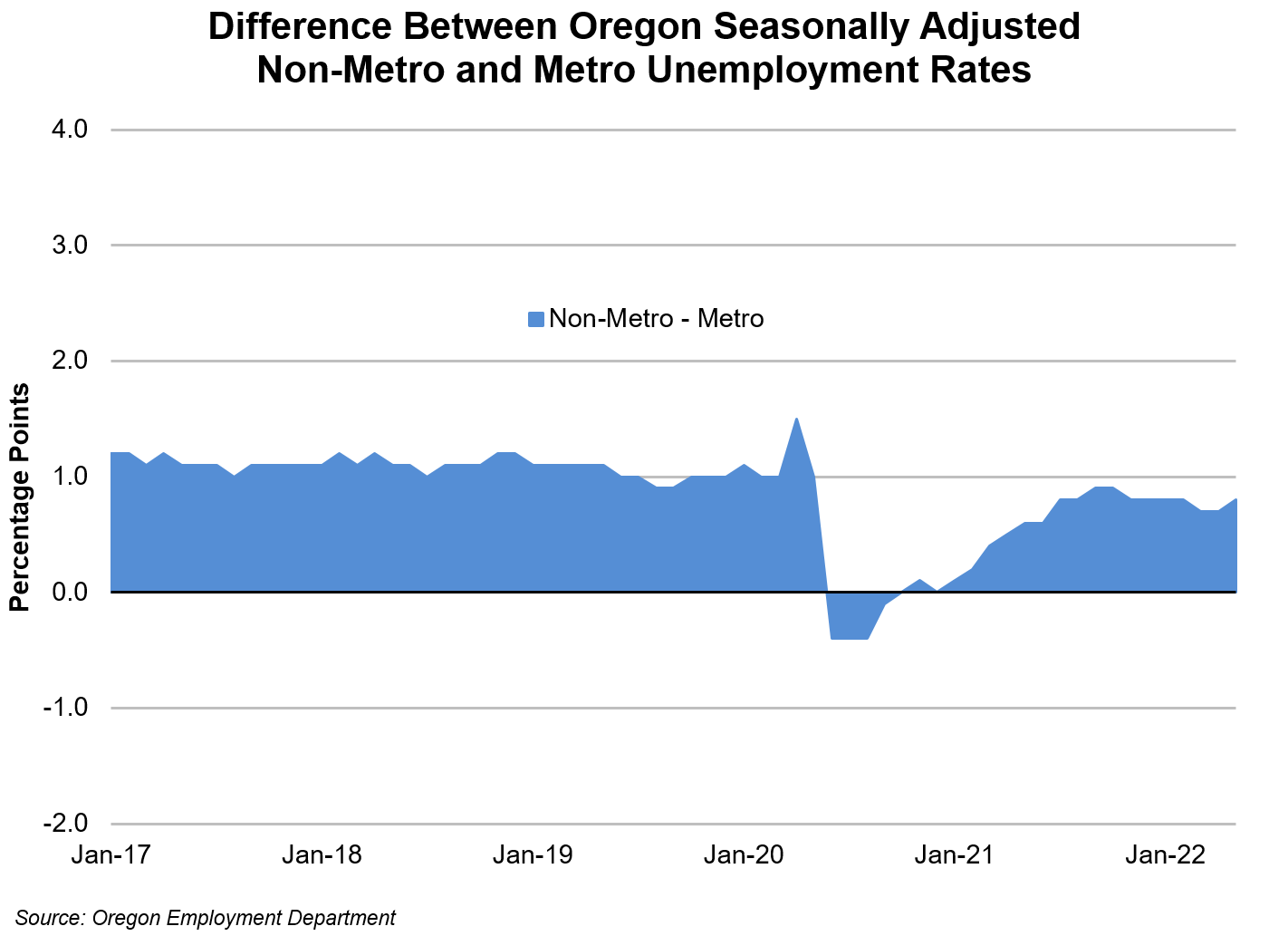