Oregon’s labor force participation rate – the percentage of the civilian noninstitutional population that is either employed or unemployed – peaked in 1998 at 68.9 percent and has since generally declined. The labor force participation rate (LFPR) fell to 61.3 percent in 2020, the lowest annual percentage since comparable records began in 1976. Oregon’s LFPR remained near the 2020 series low in 2021, increasing slightly to 62.3 percent in 2021. 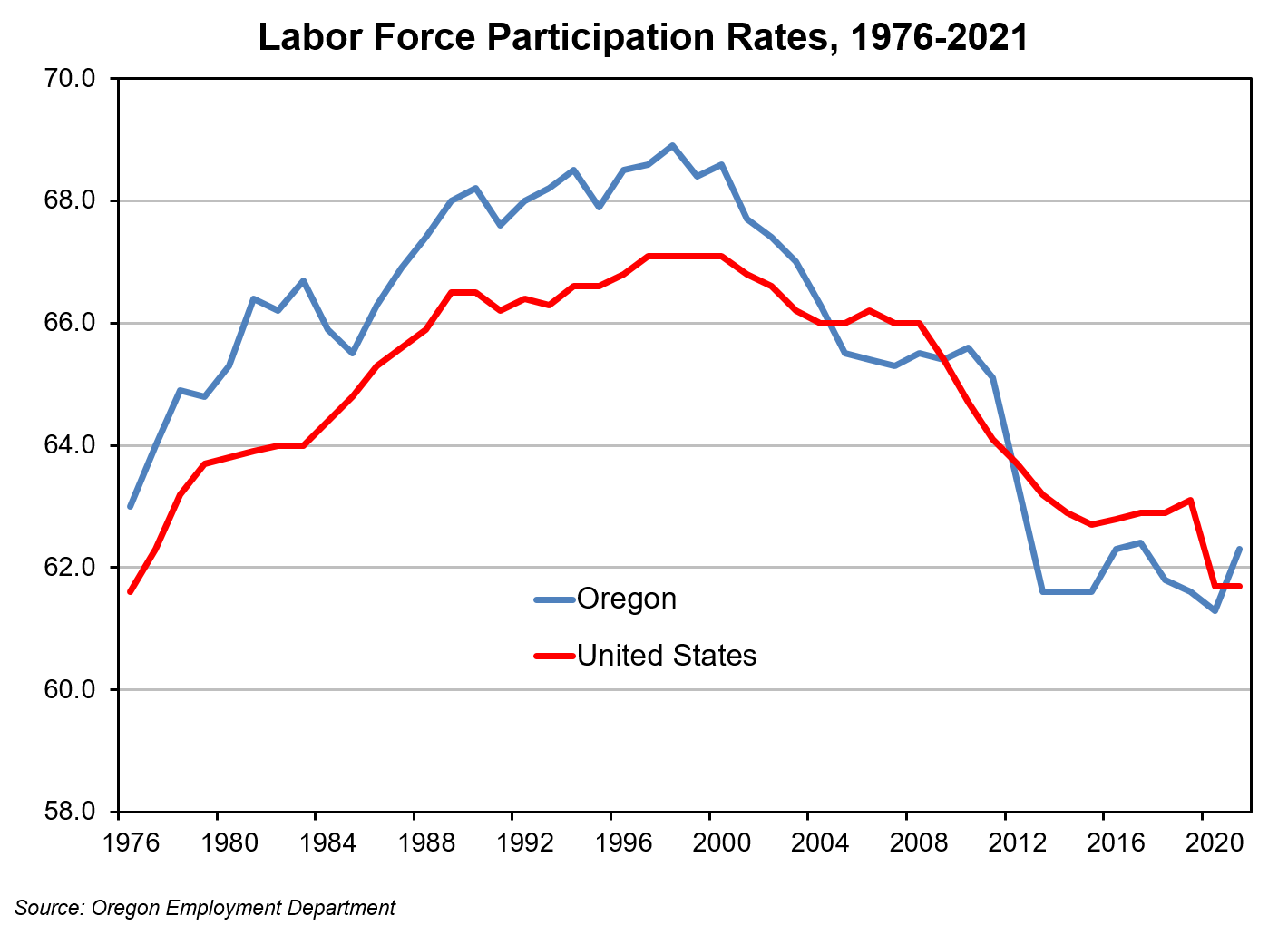 Declining Labor Force Participation Is Not Unique to Oregon

The trend in Oregon’s LFPR resembles the overall trend for the United States, which peaked in the late 1990s and has since fallen to historically low levels.

One of the main reasons for falling participation since the late nineties is changing age demographics. People 16 to 24 years of age are delaying entry into the labor force to a greater extent than in the past due to increased participation in school-related activities, lowering labor force participation rates for this age group and by extension the overall LFPR. People aged 65 years and over – an age group most likely to be out of the labor force due to retirement – make up a larger share of the civilian noninstitutional population today than they did in the late nineties, as the oldest members of the baby boom generation began to reach this age category in 2012. LFPRs for people age 65 years and over are much lower than those for the prime working age group – people age 25 to 54 years. Therefore, as the baby boom generation continues to age into the 65 years and over population group, overall LFPRs will experience downward pressure as a larger share of the population reach an age group with an LFPR that is historically lower than those for other age categories.

In addition to changing age demographics, other factors, including the overall business cycle, have impacted LFPRs over time. The Oregon Employment Department published a special report on the labor force in June 2014 exploring these trends for the state in more detail. The analysis in this report covered data through 2013. More information and background on the trends in Oregon’s labor force can be found in this report.

Labor force participation rates for Oregon’s counties in 2021 ranged from a high in Hood River County of 75.9 percent to a low in Curry County of 43.7 percent. 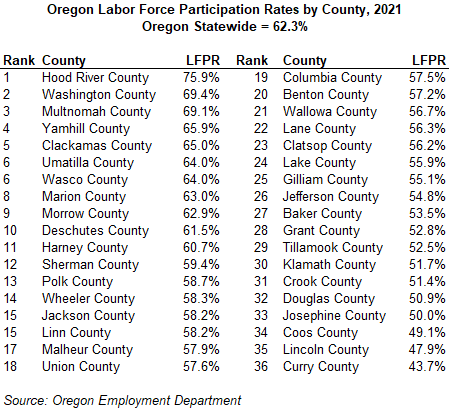 Why Do Labor Force Participation Rates Vary by County?

Although several factors can influence the overall LFPR level in each county, there are some general tendencies in the data among counties that have higher or lower LFPRs than the state average. State level data show that LFPRs vary by race, ethnicity, gender and age. As population shifts and demographic groups comprise of a larger or smaller share of a county’s total population, these changes impact the overall LFPR. In addition, demographic groups can change their labor force participation over time, and across counties. As county LFPR data by demographic group comparable to the county LFPRs presented in this article are not available, this section will focus on the share of the total population that demographic groups comprise in each county. In addition to the influence of demographics on a county’s LFPR, economic factors will be considered later in this section. 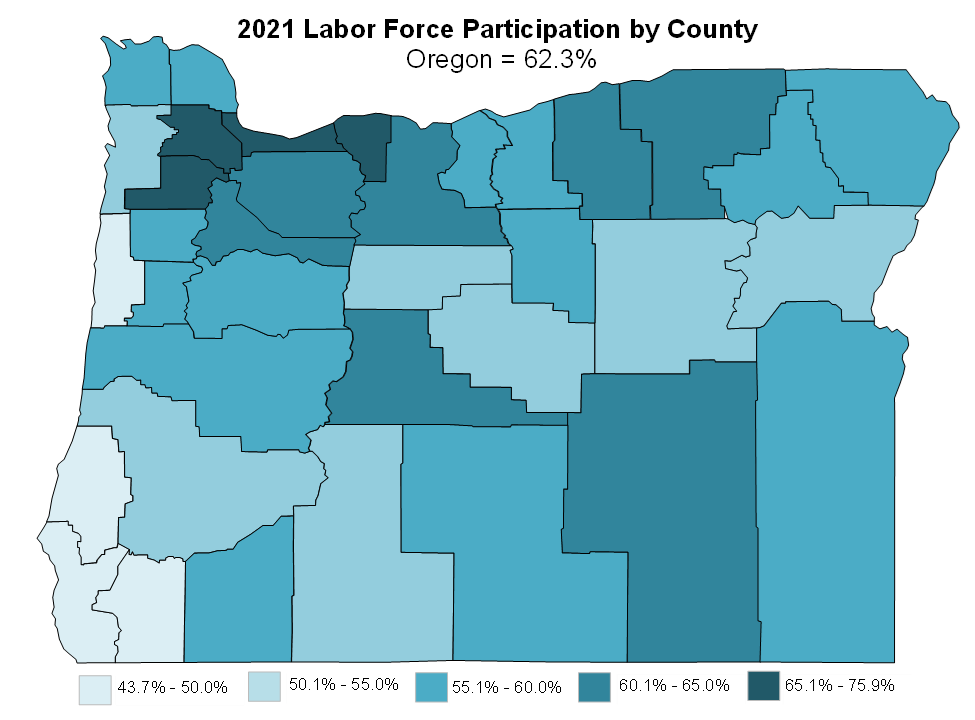 Those in the age range of 16 to 24 years have a lower LFPR than the overall average; nearly 2.0 percentage points lower than the statewide average in Oregon in 2021. The counties in Oregon with the highest percentage of the population between the ages of 16 to 24 in 2021 – Benton County (24.1%), Polk County (14.6%), Lane County (14.3%), and Union County (13.9%) – are each home to a sizable university relative to the overall county population. As the presence of a university boosts an area’s population in this age range, the result is downward pressure on the LFPR since this age group tends to participate less in the labor force due to school attendance and related activities. The counties mentioned above all have LFPRs that were lower than the statewide average in 2021.

The LFPR for men in Oregon in 2021 was 67.1 percent and the LFPR for women was 57.5 percent. However, population shares by gender don’t show significant correlations with county LFPRs in Oregon, as each county in Oregon has a near 50-50 split in gender groups.

A county’s LFPR is determined by a combination of factors, and it is not always easy to definitively identify “one factor” as the reason a county’s LFPR is high or low from all the other factors. Further, as multiple factors are at play, one factor associated with higher LFPRs may be offset by another factor associated with a lower LFPR. An example of such offsetting factors in the above analysis was Benton County, a county with a low unemployment rate and a large percentage of the population age 16 to 24 years – the end result being Benton County’s LFPR was near the middle of the rankings in 2021. With caution in mind that correlations are not perfect, general patterns do emerge among the counties with higher and lower LFPRs than the statewide average. For example, Hood River County, with the highest LFPR in Oregon in 2021 at 75.9 percent, is consistently near the top of the lists of county rankings in factors associated with a high LFPR. At the other end of the spectrum, Curry County – with the lowest LFPR in Oregon in 2021 at 43.7 percent – had the second largest percentage of population age 65 years and over and one of the higher unemployment rates among Oregon’s counties at 6.7 percent.