The high-tech industry does not have one standard definition or official government code. Instead, it is a mix of service and manufacturing businesses from a variety of industries. High tech means different things to different people and organizations. Prior to 2013, the Oregon Employment Department defined high tech as three computer-related industries: computer and electronic product manufacturing, systems design and related services, and software publishing.

In 2014, the U.S. Bureau of Labor Statistics created a national high-tech industry taxonomy including a broader array of industries in which STEM occupations are highly concentrated. This high-tech taxonomy is a better, more comprehensive collection of industries that produce innovative, technologically advanced products and services. 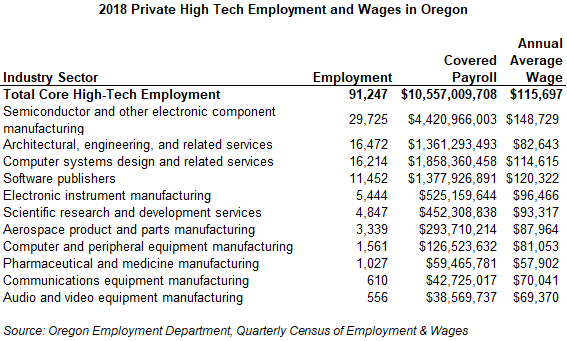 High tech saw more significant employment losses during the Great Recession. Core high-tech employment peaked at 81,389 in July 2008 and began rapidly declining, reaching a trough of 71,024 in February 2010. From peak to trough, the industry shed more than 10,000 jobs – 13% of its workforce. In contrast, total employment across all industries during the same period declined by 9%. The industry has rebounded significantly since and surpassed its pre-recession peak employment in mid-2014. 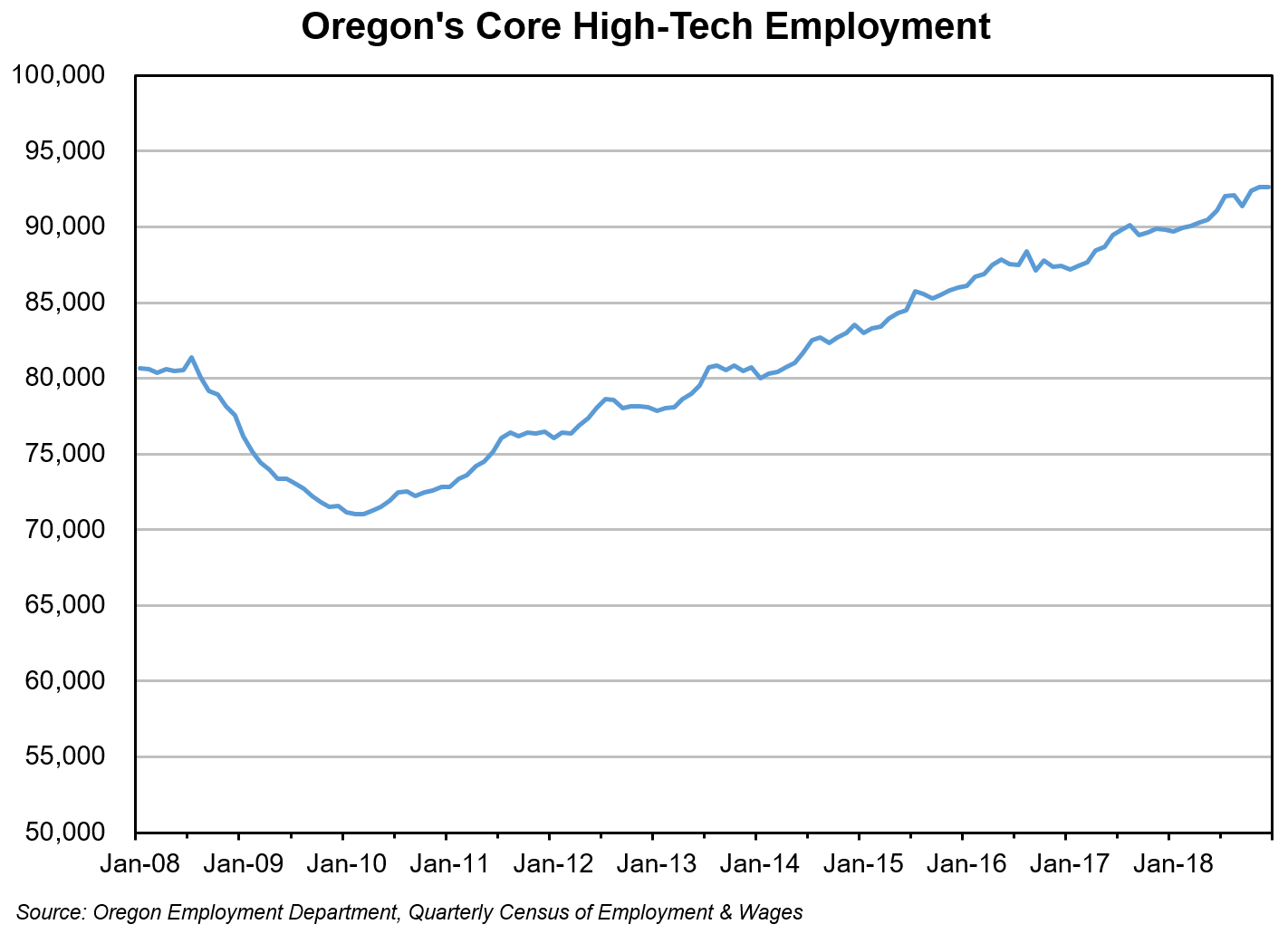 Core high tech accounts for 5.5% of all covered private-sector employment statewide. Across its sub-sectors, employment varies greatly. Almost one-third of core high-tech employment in Oregon is in semiconductor and electronic component manufacturing. In fact, employment in this industry is over six times more concentrated in Oregon than it is nationally. Other large industries of employment include computer systems design, architectural and engineering services, and software publishers.

The majority of high-tech firms in core industries are located in our largest metropolitan areas: Portland, Eugene, Bend, and Salem. Tech firms also have a presence along the Northwest Oregon coast and in Southern Oregon along the Interstate 5 corridor.

High-tech workers in core industries are more likely to be of prime working age (ages 25 to 54). More than three-quarters of high-tech workers fall into this age group, compared with 65% of workers across all industries. Younger workers (ages 14 to 24) are not as common, most likely due to the postsecondary training required for this industry.

Workers over age 55 also have a slightly smaller share of employment in the high-tech industry than in all industries, at 20% and 23%, respectively.

In both Oregon and the United States overall, core high-tech employment is disproportionally male. Males account for 70% of employment in high tech, compared with 53% of private employment across all industries. 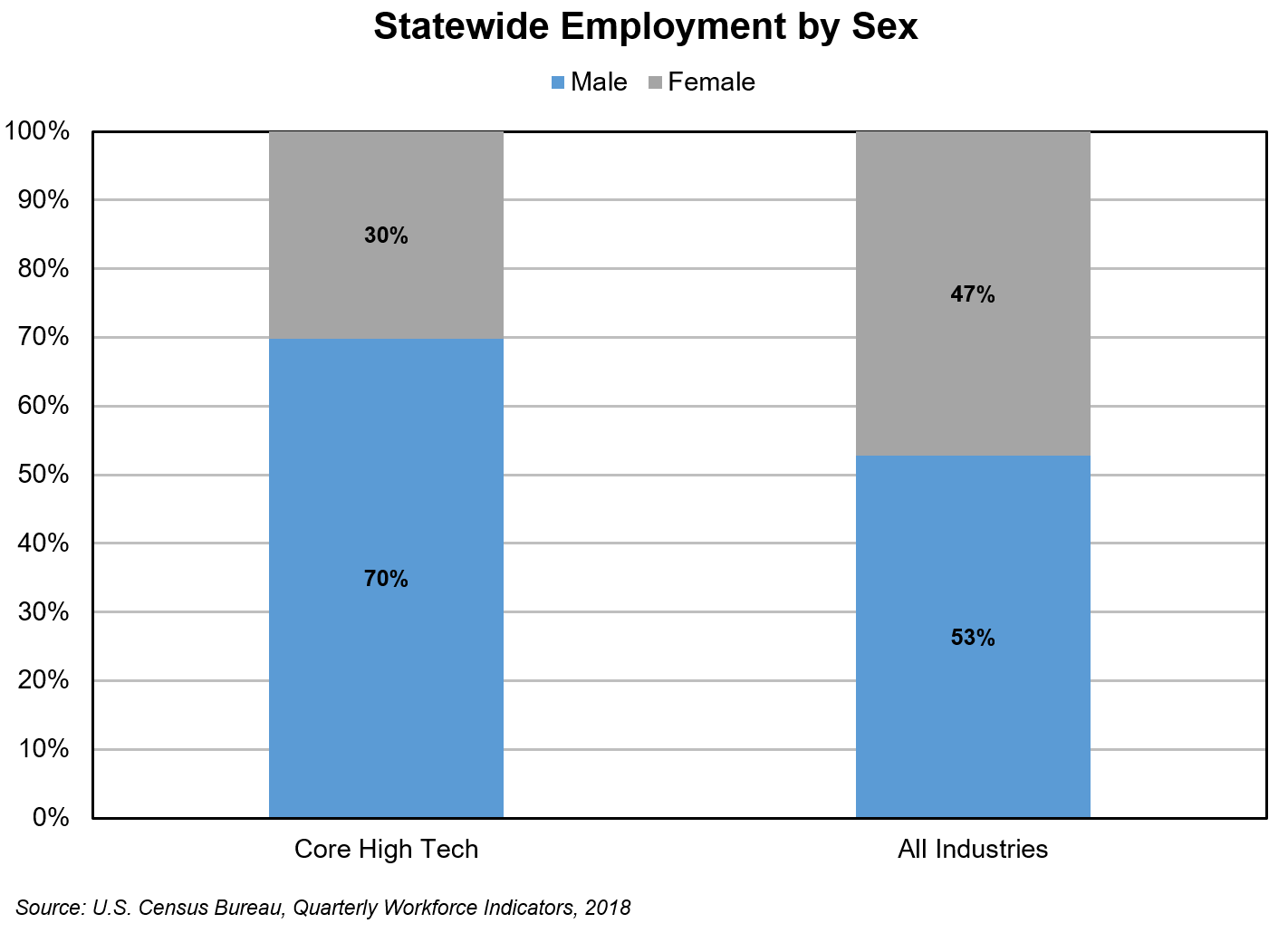 At the industry level, average wages in high-tech are some of the highest in the state. In 2020, the average annual wage was more than $120,000 for core industries. Across high tech’s sub-sectors, wages vary greatly, from a high of more than $150,000 in semiconductor and electronic component manufacturing to $57,000 in pharmaceutical and medicine manufacturing. Nearly all high-tech industry sectors have higher wages than the statewide annual average wage of $59,927. 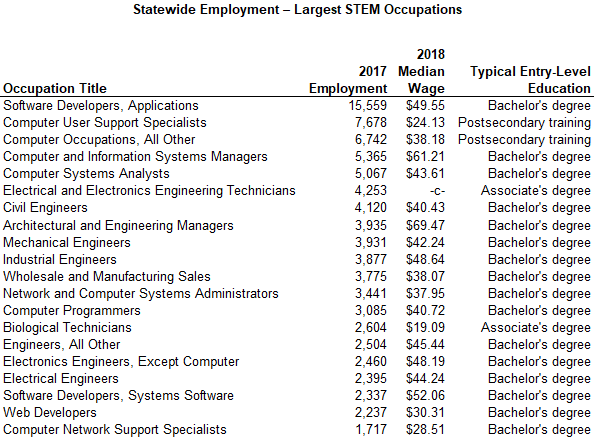 While statewide employment projections are not available for all industries, the Oregon Employment Department forecasts that the five largest core high-tech industries will grow by 15% between 2020 and 2030 (compared with 12% growth across all industries). The future is particularly promising for the computer systems design and software publishing industries, with projected growth rates of 25% and 18%, respectively. Regardless of the losses suffered during the last (and other) recessions, high tech’s dominant presence will continue to enhance Oregon’s ability to compete and succeed, both locally and globally.