Employment in printing and related support activities has been on the decline since the late 1990s. Advances in digital technology have contributed to the decline in two important ways: first, by changing the marketplace the industry operates in as options to deliver information become more diverse; and second, by improving productivity so the industry needs fewer workers to do the same amount of work.

Firms in the printing and related support activities industry (which will be referred to as the “printing industry”) print products, such as newspapers, books, periodicals, business forms, greeting cards, and other materials, and perform support activities, such as bookbinding, platemaking, and data imaging. Some newspapers and other publishers that do in-house printing are classified in the publishing industry of the information sector and are not included here.

An Industry in Long-Term Decline

Employment in the printing industry has been declining for more than two decades, but it remains an important industry in Oregon, employing about 3,800 and paying more than $193 million in total payroll in 2021.

Annual average employment in the industry has dropped about 55% since 2001. Going further back in time, employment in commercial printing had increased until the mid-1990s. It then leveled off for a few years before starting a slow decline in the late 1990s. The decline accelerated during the early part of the 2000s. After a relatively stable period between 2006 and 2008, the industry, like most in manufacturing, was hurt by the Great Recession. Afterwards, employment was relatively stable, declining slowly over the next seven years. The printing industry again lost jobs at the onset of the COVID-19 pandemic, losing roughly 900 jobs between February and April 2020. It has since regained some of the loss and remained stable, reaching about 3,900 jobs by June 2022.

The support activities for printing subsector is relatively small, with an annual average employment of 97 in 2021, down 88% from the 812 recorded in 2001. 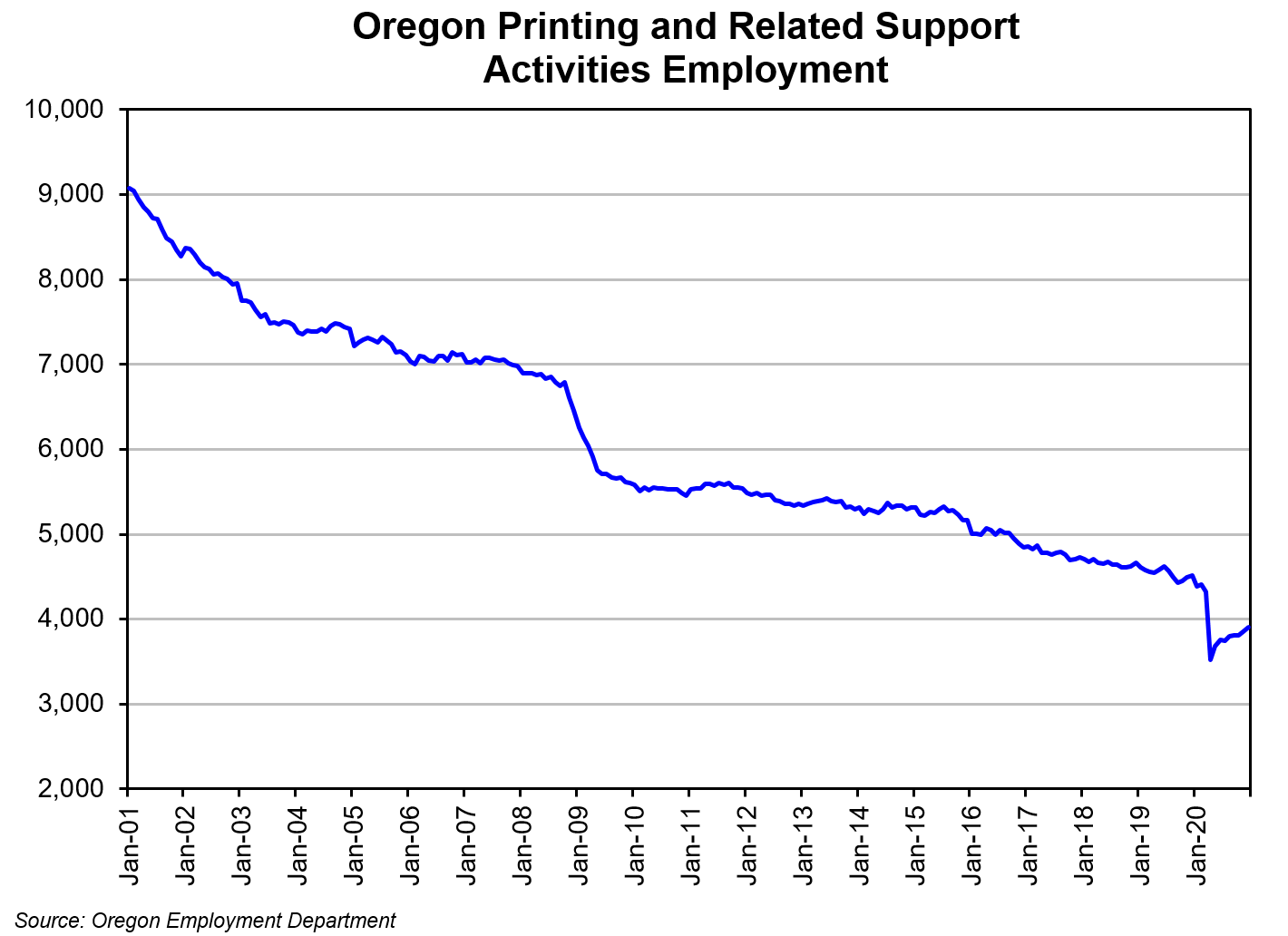 Technology and the Printing Industry

Today, however, other forms of media are distributing information at an increasing rate. First radio, then television, and now the internet and e-books have taken market share. This has reduced the demand for printed material and contributed to the decline of industry employment.

Although some in-house newspaper printing is not included in this industry, the decline of newspaper circulation is a prime example of how technology has reduced the demand for printed material. Online news has many advantages. It is often free of charge, has a wider range of information available, and has the ability to provide updates several times a day. This has pushed people online for their news and away from print newspapers. According to the Newspaper Association of America, paid circulation began to drop in the late 1980s. Between 1990 and 2014, weekday circulation in the U.S. dropped from 62 million to 40 million, a loss of 35%. According to estimates from the Pew Research Center, weekday circulation (both print and digital) dropped from 26 million in 2019 to 24 million in 2020. In 2020, digital circulation rose 27%, but it was not enough to make up for the 19% decline in print-only circulation. 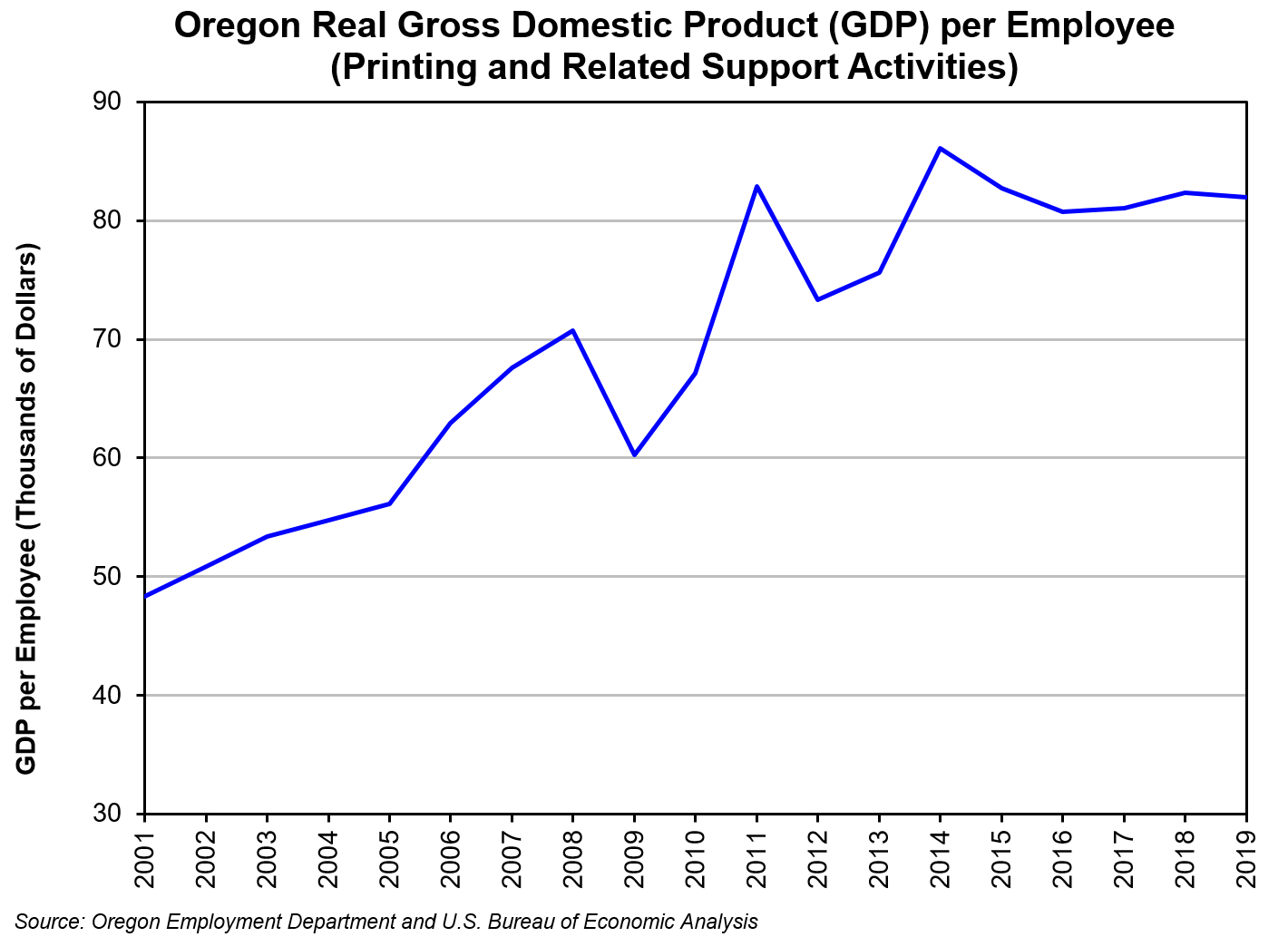 Occupations in the Printing Industry

The table below lists the representative large occupations in the printing industry and their wages. The wages listed are for all industries that include the occupation, not just printing and support activities. Wages in the printing and support activities industry are midlevel. The 2021 average annual pay for the industry was $50,400 compared with an overall statewide wage for all industries of $64,000. However, wages in the industry are low for a manufacturing industry. Overall, manufacturing has an average annual wage of $78,400.

Most occupations in printing production, such as printing machine operators and bindery workers, require only a high school diploma and moderate on-the-job training, and tend to pay below the industry average. Others, like those in management or cost estimation, may require education beyond high school and generally pay higher wages. 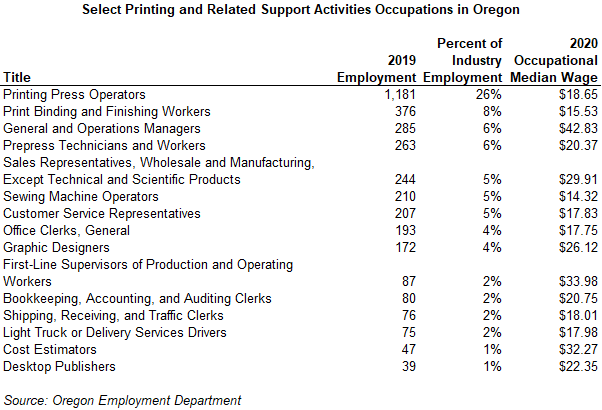 According to the Bureau of Labor Statistics, national employment in the printing and related support activities industry is expected to decline by roughly 26% between 2021 and 2031. Continued loss of market share to other media and continued automation causes net overall employment to decline in the future at about the same pace as recent years. In the 10 years between 2011 and 2021, the industry declined by about 22%.

Demand for some forms of printed material like packaging and direct mail advertising that are not as susceptible to replacement by electronic formats is expected to increase along with economic and population growth. This will moderate the losses from technical advances expected elsewhere in the industry.

After years of decline since the 1990s, including a big drop during the Great Recession and a smaller one due to COVID-19, the long-term projection is for future advancements in technology to further reduce employment in the printing industry. Still, printed products will have a place in our economy for a long time to come. In the future, declines in printing-industry employment are expected to continue at about the same pace as the past decade but openings due to replacement needs will provide opportunities.