How can workers on the Oregon Coast find higher-paying jobs? The best single answer is to get the education and training to enter a higher-paying occupation. (Our website www.qualityinfo.org had information about those occupations.) But that isn’t the full answer. It is also important to know which firms tend to pay higher wages. State law protects the confidentiality of wage records of individual firms, but we can provide some general clues about these firms by publishing wages by industry and by firm size.

In general, larger firms pay higher wages, and firms that produce goods or deal with specialized knowledge tend to pay higher wages. The table below shows average wages in 2020 for different industries by their size based on their number of employees. 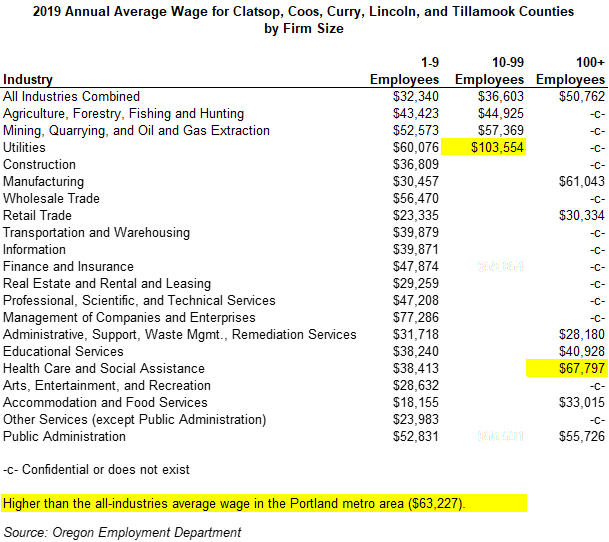 The average wage for firms with one to nine employees was $34,491. Wages increased for mid-sized firms to $40,656, and for large firms to $53,626. The goods producing industries, such as manufacturing (except small manufacturers), mining, and utilities, usually paid higher wages than most service industries, such as accommodation and food services. For example, small utilities firms paid an average of $62,969 per year, versus small accommodation and food services firms that paid an average of $19,440 per year.

For some occupations a challenge for coastal employers is competing with employers in the Portland metro area. The overall average wage for the Portland metro area in 2020 was $69,127. Wages that are higher than this amount are highlighted in yellow in the table. Only two of the published industry/size combinations paid higher wages than the average wage in Portland. This illustrates one reason why young people at the beginning of their careers, and perhaps the peak of their mobility, may leave the coast and move to Portland and other metropolitan areas.