Many people commute to work in the same county in which they live, and that seems to be the case in Benton, Clatsop, Lincoln, and Tillamook counties, but it’s not true in Columbia County. Columbia County’s proximity to the rest of the Portland metro area makes it easy for residents to work in those adjacent counties, and most do so.

In all counties the recorded work location of residents is often determined by where their paychecks are processed. This is not always the same as their physical worksite. Workers may telecommute, have mobile worksites or have paychecks processed at a distant headquarters. The following tables show the recorded worksite of the working residents of each county in 2019, but keep in mind that the worker counts in distant locations may be overstated.

Corvallis not only dominates Benton County’s economy, it provides employment for thousands of commuters from surrounding counties. This is thanks in large part to the presence of Oregon State University, Hewlett-Packard, and Samaritan Health Services and their thousands of jobs. As a result of this job availability, a little more than half of the county’s residents who worked did so in the county, and 42.4% worked in just Corvallis. Residents who commuted out of the county to work tended to head to neighboring Linn County and its cities of Albany and Lebanon. Other commuters head up and down I-5 to Salem, Portland, and Eugene employers. 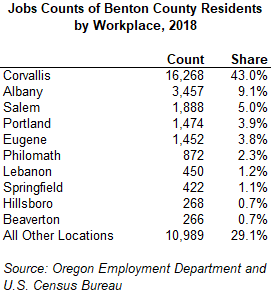 Of the five counties in Northwest Oregon, Clatsop County had the largest share (58.6%) of working residents who worked in their home county. The county’s economy is largely clustered in its northwest corner, where Astoria and Warrenton are located, and along the ocean where Seaside, Gearhart, and Cannon Beach are located. Astoria was the most popular destination for work for Clatsop County residents followed by Seaside and Warrenton. A fair number also commuted out of the county to metro areas in the Willamette Valley. Although the county’s most populous city is connected to Washington by the famous Astoria-Megler Bridge, it didn’t carry a large number of commuters out of the county to that state. Nor did many county residents commute south to Tillamook County for work; only 1.5% did so in 2019. 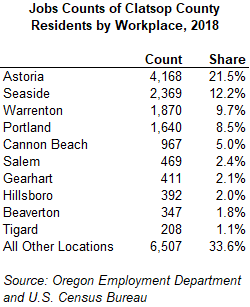 About 74% of Columbia County residents who worked commuted to other counties to work in 2019 according to the Census Bureau. This percentage has been fairly stable over the past few years. Portland was the most popular city for the county’s working residents followed by St. Helens, then Hillsboro. Columbia County residents are also tied to jobs in Washington. Nearly 4% commuted to Cowlitz County to the north, although that share has been declining, and 3% commuted to Clark County to the east. Cities and unincorporated areas in southern Columbia County are increasingly attractive options for Portland-area workers looking for affordable housing. A recent real estate summary from RMLS showed a median residential property sale price of $449,000 for Columbia County versus $754,200 for adjacent northwest Washington County. 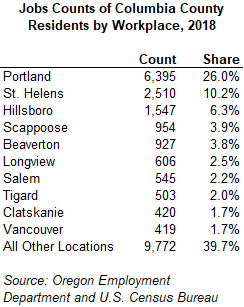 Lincoln County, like Clatsop County, is more isolated from the metro areas in the Willamette Valley than some other counties. About 57% of the county’s working residents worked within the county in 2019.

Newport is the county seat and largest city, and it was primary destination for the county’s working residents. Lincoln City could arguably be the largest city in the county on a nice summer weekend due to its influx of visitors. The city’s travel industry provides many jobs and makes it the county’s second-largest job market.

Although the records indicate that roughly 1,300 resident commute to Portland for work, it’s probably not that they are all driving the two-plus hours each way every day. This is likely a case when the data overstate the actual commuting. Some of these Lincoln County residents are almost certainly working remotely for Portland companies or have their paychecks processed in Portland. 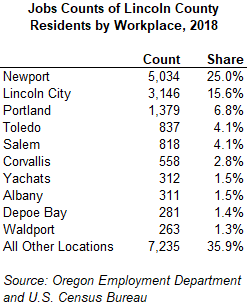 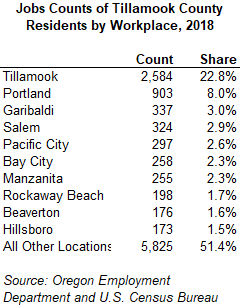 The widespread practice of commuting to work is important to keep in mind when picking a career, job hunting or investing in local job training programs. Rural residents will market their skills where they will be rewarded. Often that is close to home, but increasingly it will be to more distant employers and telecommuting.