Print Rebuilding the Pipeline: Supply and Demand in the Skilled Trades

Rebuilding the Pipeline: Supply and Demand in the Skilled Trades

Many of the systems that make modern life possible and comfortable are brought to you by skilled tradespeople. From the plumbing just beyond the walls to the overhead lines powering the screen you’re reading now, the systems we rely on are created and maintained by people who have mastered a skilled trade.

While the talents of skilled tradespeople might be underappreciated, the businesses that rely on them know how difficult it is to get along without them. Building career pathways to fill these jobs is critical for employers, businesses and workers alike.

But that task may be more difficult than it seems. Even high wages, plentiful jobs, and valuable work aren’t always enough to overcome skepticism towards opportunities in skilled trades. To the extent that we need to rebuild the pipeline to the skilled trades, it will be a task that can’t be completed overnight.

What Is a Skilled Trade?

There is no definitive list of skilled trades, but they share some characteristics. All skilled trades rely on a set of technical proficiencies learned over time. For entry, candidates generally need some post-high school training or licensure, but not a bachelor’s degree.

For this article, I will focus on skilled trades for which apprenticeship is an option. An apprenticeship is a registered training program that allows trainees to earn a wage while learning trade skills. Below is a list of apprenticible trades from the Oregon Bureau of Labor and Industries Apprenticeship and Training Division (ATD). Each of these occupations have established pathways for on-the-job training with a journey-level worker.

Skilled trades are most commonly associated with the construction or manufacturing sectors. Examples include carpenters, electricians, and plumbers, each of which master a different aspect of the construction process. In modern times, the apprenticeship model has expanded to include occupations that work in other sectors, such as software developers and medical assistants. 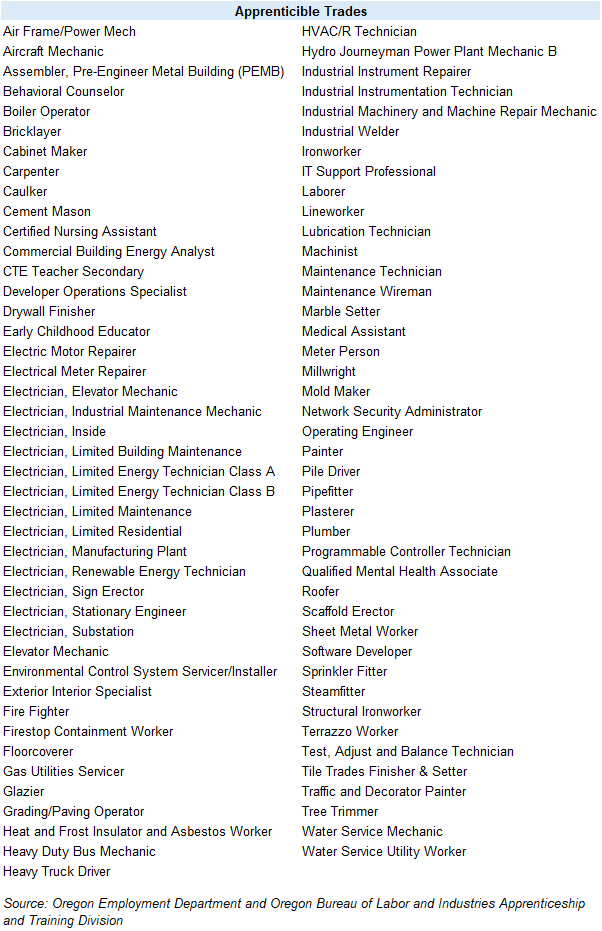 If you’d like to know more about apprenticeship opportunities please visit the ATD website for information on local programs.

Grandpa Is a Carpenter: Demand for Skilled Trades

From demographic trends to employer surveys, much of our data supports the view that the demand for skilled workers in the trades exceeds current supply.

Aging in the trades will open up opportunities for new employees as workers retire. In 2019, workers age 55 and older made up nearly a quarter of the construction and manufacturing workforce, a share that has increased by 15 percentage points in the last 25 years.

On top of demographic changes, industries employing the trades have been growing quickly. Construction has been one of the fastest growing industries in Oregon in recent years. Manufacturing employment has grown as well, and both sectors have been relatively less affected by job loss due to COVID-19 than other sectors. Hiring skilled tradespeople is a pain point for many manufacturers and construction firms, even in an environment where unemployment is significantly higher than in years past. 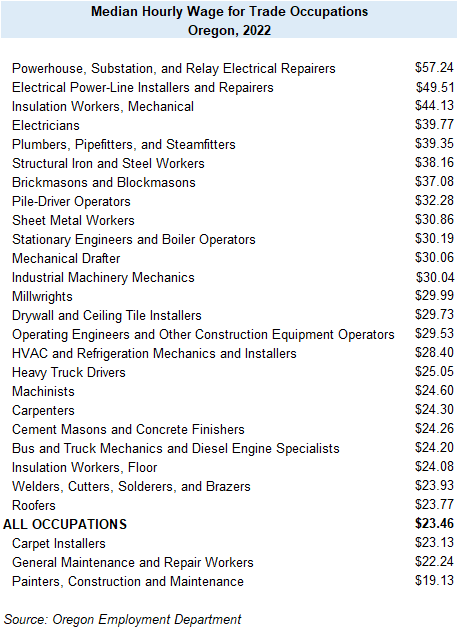 Every year the Employment Department surveys businesses on their job vacancies and difficulty filling them. The resulting data give us important context on how difficult it is to hire for trades positions relative to other kinds of jobs.

In the extremely tight 2021 labor market, 72% of all jobs were difficult for employers to fill, the highest level seen since the survey began in 2013. For most of the largest trade occupations, businesses found it even more difficult to fill open vacancies.

Trading Up: The Supply of Skilled Trades Workers

For those who train apprentices or prepare students, rebuilding the pipeline will require fresh thinking about how to make a program appealing and responsive to the needs of the workforce.

Many believe that a push towards “college for all” drove the elimination of vocational programs that introduced young people to trades, limiting the pipeline of potential workers. If that’s the case, then redeveloping and reimagining vocational programs is an important first step.

There are steps to take on the jobsite as well. For example, many new trainees are young with relatively little work experience. An inviting and understanding work environment helps promote success for young people, who have had fewer opportunities to build work experience than previous generations, although a tight labor market is providing more opportunities for young workers.

Supporting underrepresented groups in skilled trades is another critical element of building a strong pipeline to the next generation.

Women provide a clear example of the difference a diverse pipeline could make. Women make up nearly half of the U.S. workforce, but represent very small portions of most skilled trades. Only about one in 20 machine mechanics in the U.S. is female, and for several large trades the number is closer to one out of 50 or one out of 100. 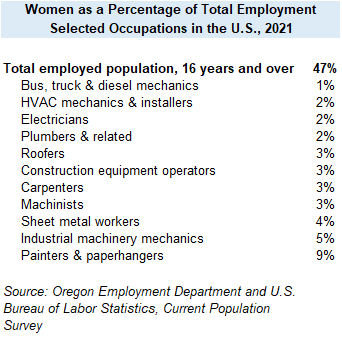 Female jobseekers are just as capable at learning and performing skilled trades, and employers that are able to recruit and retain women in these roles can instantly double their potential candidate pool.

When Do I Start?

If you want to learn more about a particular trade, check out our Occupation Profiles tool to see what growth and wages look like in your area and what kind of training and work conditions you can expect.

For example, search for “Carpenters” through the tool and scroll down through:

When it comes to making a career decision, you should always consider your interest and skills along with career viability and likely earnings. With the number of highly paid and in-demand options, trades are definitely worth considering if they align with your career goals.

Limiting college debt and finding fulfilling work are increasingly central to our career decisions. In that context, it’s hard to ignore skilled trades, where trainees can get paid to learn and become part of a proud tradition of craftsmanship.

Still, a lack of parent and teacher familiarity with the opportunities available may lead them to steer students away from a career in the trades. While the return on higher education is substantial on average, that’s not to say that every student is best served by pursuing a bachelor’s degree immediately after high school. Teachers, trainers, and parents can help by framing skilled trades and apprenticeships as another pathway to lifelong learning.

Skilled trades and college increasingly aren’t an either-or proposition anyway, but whether they go on to earn a bachelors’ degree or not, tradespeople are creative problem solvers that continually hone their craft, learning to respond to new technologies and trends.

Shifting our mindset about who can succeed in the trades is critical as well. Many paths bring people to a career in the trades, which often require an artistic touch and an analytical mind as well as mechanical skills. In short, a true rebuilding of the pipeline requires broader community recognition of the value and opportunity in skilled trade work.