Print Who is Included in Oregon’s Unemployment Rate Calculation?

Who is Included in Oregon’s Unemployment Rate Calculation?

Simply stated, segments of the population in the table under the heading “included” are factored into the unemployment rate calculation while those under the heading “excluded” are not. Data on some of the groups listed in the table are published by BLS, while others (many of the groups in the “excluded” column) are not published. For this reason, the table is an oversimplification. In reality, the classification scheme is more complex and there are procedures in place to deal with gray areas. 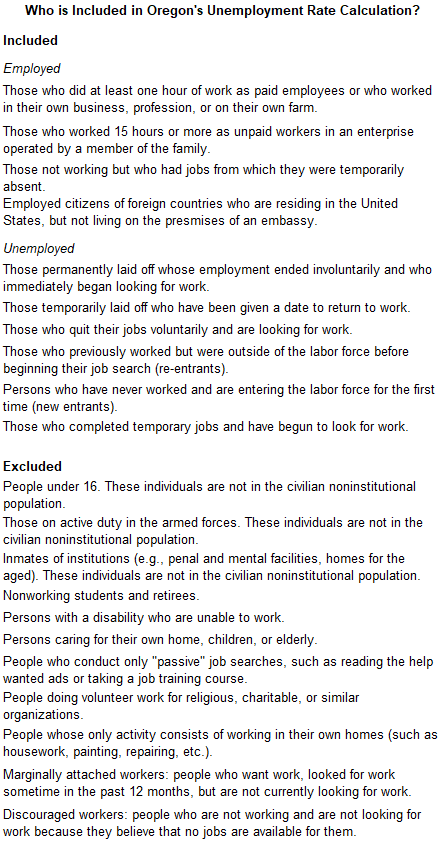 Detailed labor market data for Oregon are only published annually on the BLS website. One source is the Geographic Profile of Employment and Unemployment (GP). GP data are based on annual averages from the Current Population Survey (CPS), most recently for 2020, and available on the BLS website at: https://www.bls.gov/opub/geographic-profile/home.htm. Although not as detailed as the GP reports, another source of detailed data are available for 2021 for states at: https://www.bls.gov/lau/ptable14full2021.pdf. Oregon data are on page 40 of this report. These and other reports are located under the Annual Average section of the Local Area Unemployment Statistics (LAUS) home page at: https://www.bls.gov/lau/.

The CNP is comprised of all persons 16 and older, excluding the institutional population (e.g., penal and mental facilities or homes for the aged) and those on active duty in the U.S. Armed Forces. The CNP is the population base for the derivation of the labor force data. Oregon’s 2021 annual average CNP was around 3.5 million.

The employed consist of two main groups. The first group is all civilians who, during the survey week, did at least one hour of work as paid employees, worked in their own business, profession, or on their own farm, or who worked 15 hours or more as unpaid workers in an enterprise operated by a member of the family. The second group includes those who were not working but had jobs from which they were temporarily absent. Reasons for temporary absence from work include illness, inclement weather, vacation, childcare problems, maternity or paternity leave, labor-management disputes, job training, or other family or personal reasons, whether they were paid for the time off or seeking other jobs. In 2021, approximately 4.5% of Oregon’s 2.0 million employed were temporarily away from their jobs. Each employed person is counted only once each month, even if he or she holds more than one job.

Not considered employed are persons whose only activity consists of working in their own homes, doing activities such as painting, repairing, cleaning, or other home-related work. Also excluded from the total employment number are those only doing volunteer work for religious, charitable, or similar organizations. Those only caring for children or elderly are excluded as well.

Total unemployment is composed of all persons who were not employed during the CPS reference week but were available for work and had made specific efforts to find employment some time during the four-week period ending with the CPS reference week. Individuals waiting to be recalled to a job from which they had been laid off, known as “persons on layoff,” do not need to be looking for work to be classified as unemployed.

The five major categories of unemployed persons are grouped by their status at the time they became unemployed:

A Note on Using the Detailed State Labor Force Data

GP and CPS annual employment and unemployment data for states will not be identical to the annual average estimates based on the official labor force values published each month. The official annual averages for Oregon were developed using time series models of survey-based data, whereas the CPS annual tables reflect averages of survey-based data.

Which data series should be used for analysis? The answer depends on the purpose of the analysis. If an analyst is tracking Oregon’s unemployment rate over time, then the official data should be used. On the other hand, if an analyst is focusing on detailed labor force information within a given year, then GP and CPS annual data are the best option.

This article provides a general overview of the population segments included in Oregon’s unemployment rate calculation. The unemployment rate is a useful indicator of labor market conditions in a geographical area. However, it provides only one perspective of a complex and dynamic job market. For the nation, greater detailed data series provide more information about the labor market each month. This labor force detail, however, is not published each month for Oregon. The only labor force data published for Oregon by month are the civilian labor force, total employment, total unemployment, and the unemployment rate. More detailed information about Oregon’s CNP is published annually on the BLS-LAUS website.