Print Correctional Institutions in Oregon Since 1842

Correctional Institutions in Oregon Since 1842

For over a century Oregon made do with a single prison. The Oregon Territory Jail in Oregon City was founded in 1842. After a fire in 1846, and a short lived opening in Portland, the Oregon State Penitentiary was moved to Salem in the 1850s. It was the only state prison until 1985 when a second prison, Eastern Oregon Correctional Institution, opened in Pendleton. Today, Oregon has 14 state run prisons, five youth correctional facilities, and a federal prison in Sheridan.

The Oregon Department of Corrections employed 4,287 people in 2021. A little more than half of those employees are security staff. The employees oversee 12,079 incarcerated individuals in 14 state prisons. This doesn’t include the dozens of county jails in almost every county in Oregon, and the 1,475 adults in custody at the Federal Correctional Institution in Sheridan. Beyond the numbers, this is challenging and important work, providing a safe environment for everyone while helping to rehabilitate and reintegrate those in custody back into the community. 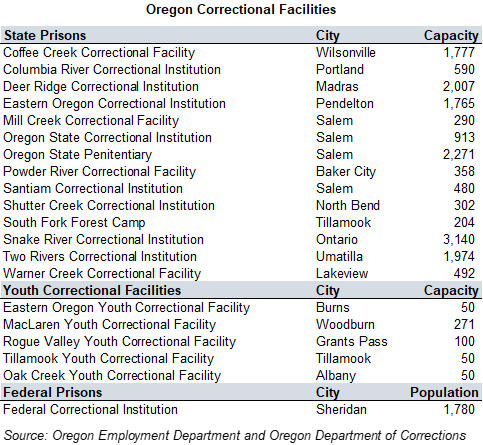 The History of Oregon Corrections

In 1994, Oregon voters overwhelmingly passed the “Tough on Crime” initiative, Ballot Measure 11. The initiative established mandatory minimum sentences for multiple crimes, required that juveniles be tried in court as adults and took away the ability for prisoners to have their sentence reduced for good behavior.

In the 10 years after Ballot Measure 11 passed, the number of adults in custody at Oregon DOC facilities shot up from about 7,000 to almost 13,000 people. This 80% increase coincided with the construction of the majority of prisons Oregon has today. For comparison, as Oregon’s prison population grew by 80%, the overall employment growth was just 16%.

The Oregon Department of Corrections releases statistics which give a rough picture of what incarceration looks like. The average Oregon adult in prison is 42 years old. Ninety-two percent of people in prison are men and more than half of those incarcerated have some level of substance abuse or addiction problems. In 2020, the median length of incarceration (excluding those serving life sentences without parole) was 69.2 months.

Beyond the Department of Corrections, almost all of Oregon’s 36 counties have a county jail operated by the county sheriff. Most individuals incarcerated in these county jails are awaiting trial or have been convicted with sentences of just a few months. Additionally, there are five youth correctional facilities in Oregon. These are administered by the Oregon Youth Authority. There are also four “transitional facilities” where young individuals who have previously offended prepare to transition back into the community. As of January 2022, the Oregon Youth Authority has 954 employees serving about 1,008 Oregon youth. About 400 live in one of the nine facilities, with another 608 on parole or probation.

The number of incarcerated individuals housed in Oregon's prisons is expected to begin increasing in the near term as intakes start to return to pre-pandemic levels. As a result of COVID-19 pandemic emergency responses, intake levels fell approximately 68%. Once long-term intake and release rates are reached, the prison population is expected to remain relatively constant for the remainder of the forecast horizon, fluctuating around 13,000 individuals through 2032. For comparison, Oregon’s population is expected to grow about 8.6% over the same timeframe. As a result of the “post-pandemic” growth in custodies, the incarceration rate (prison beds per 1,000 population) is expected to grow by 9.9% over the next 10 years. It’s important to remember that this forecast assumes no major policy changes.

Pre-pandemic, Oregon was part of a national trend of declining incarceration rates after more than doubling since the mid-1990s.There are two popular explanations for this decline: first, declining crime rates. Violent crime rates in the U.S. have declined by about 50% over the last 20 years. Also, facing record high incarceration rates, many U.S. states had been increasingly developing incarceration alternatives. These alternatives are typically rehabilitation or “diversion” programs that often include restitution, therapy, and community service, all with the goal of helping offenders avoid a felony conviction and incarceration. 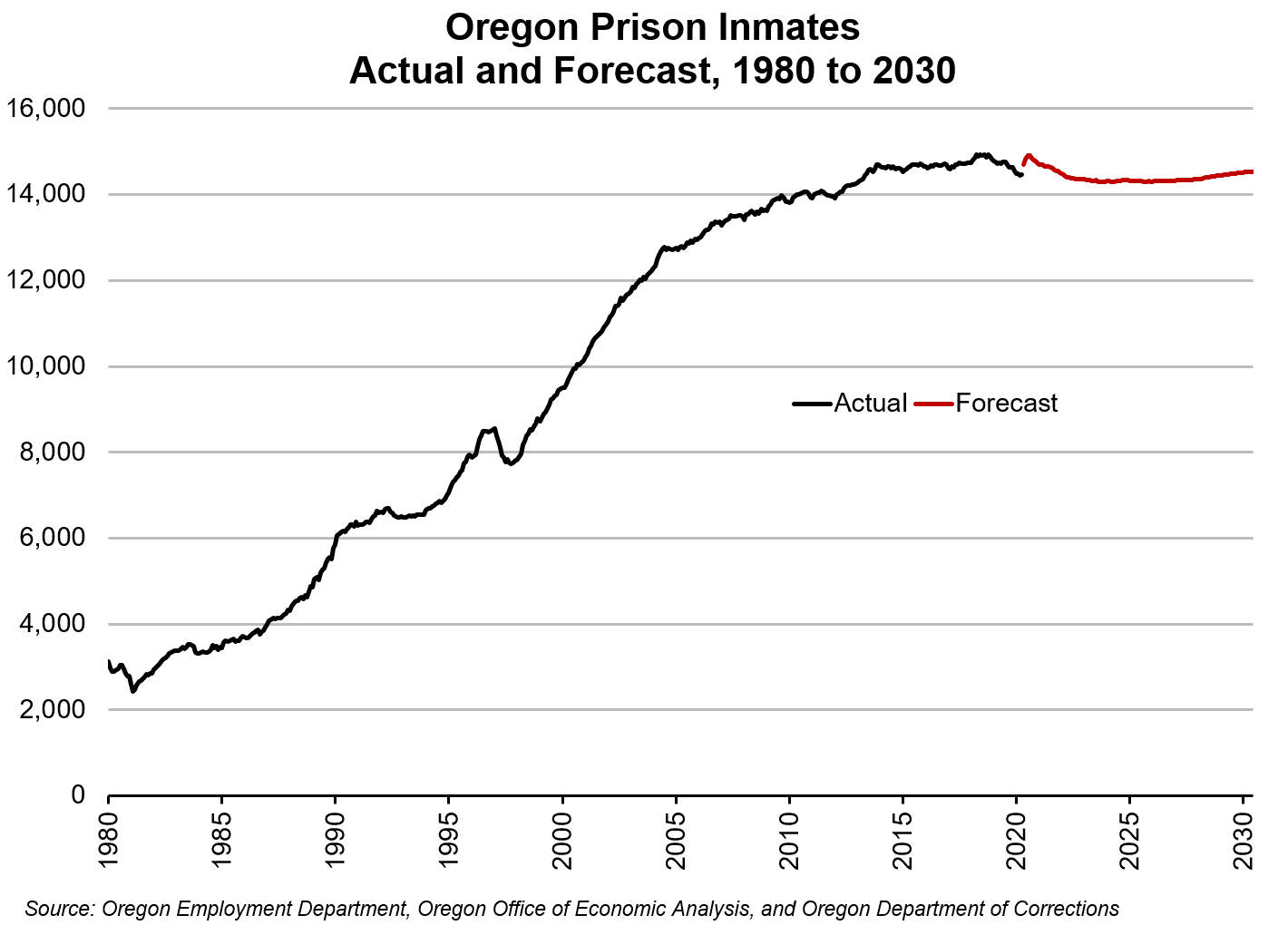 Keeping 12,079 people behind bars is expensive. The total budget of the Oregon Department of Corrections for the two-year biennium (2021-2023) is $2.0 billion. That works out to roughly $228 a day to keep an incarcerated individual safely housed.

Correctional officers maintain order within the institution and enforce rules and regulations while ensuring individuals incarcerated are orderly and obey rules. Correctional officers monitor the activities and supervise the work assignments of these individuals. Their duties may entail searching the incarcerated and their living quarters for contraband, settling disputes, and enforcing discipline. Correctional officers inspect the facilities, checking cells and other areas of the institution for unsanitary conditions, contraband, fire hazards, and any evidence of rule infractions.

These benefits come with high costs. Research studies show that correctional officers suffer from high rates of: stress related illness, elevated blood pressure, and suicide. The high pressure responsibilities of this work have clear negative health effects, but Oregon has a responsibility to keep its citizens and those in custody. This is challenging and important work because the overall success of an incarcerated individual’s reintegration impacts our society as a whole.