Print Made in Oregon: A Profile of the State’s Manufacturing Sector

Made in Oregon: A Profile of the State’s Manufacturing Sector

Oregon-made products have secured a spot on store shelves around the country, and even the world. Some of these products have obvious Oregon roots, tasty things like marionberry jam, cheese, fine wines, and beers that say ‘Oregon’ right on the label. Some Oregon-made products remain out of view, however. For example, components in the device you’re reading this article with might have been made right here in Oregon. Whether you can see it on the label or not, Oregon’s manufacturing sector produces products ranging from basic wood pellets to precise aerospace parts. The diverse sector is a fundamental component of the state’s identity, and will remain so as it continues to grow.

Manufacturing has a slightly larger than average footprint in Oregon (9.9% of employment compared with 8.4% nationally) and is growing more quickly over the long term than the nation. Manufacturing, like other industries, was negatively impacted by the pandemic recession. While Oregon has gained back most of the manufacturing jobs lost due to the recession, employment is still below its 2019 peak. Since its lowest employment level in February and March 2010 (which the United States reached again in April 2020), manufacturing employment in Oregon has grown by 20.0% compared with the nation’s 11.7%. 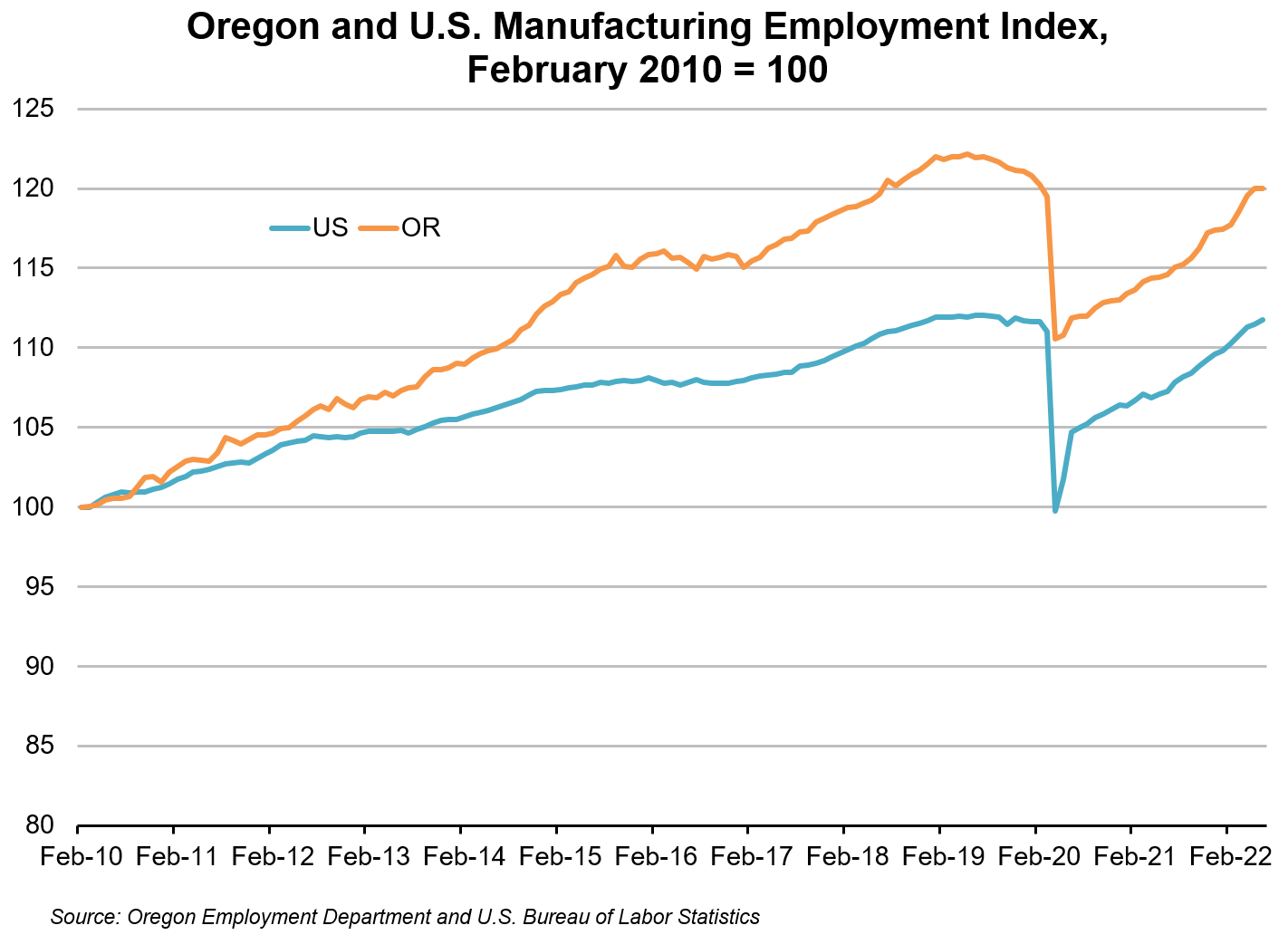 Despite outperforming the U.S. in terms of long-term growth, Oregon has recently suffered relatively sharper declines in manufacturing employment since January 2019 that have continued during the COVID-19 pandemic. Though there has been substantial recovery, employment in Oregon’s manufacturing sector declined by 2% while U.S. manufacturing has completely recovered to the January 2019 level. 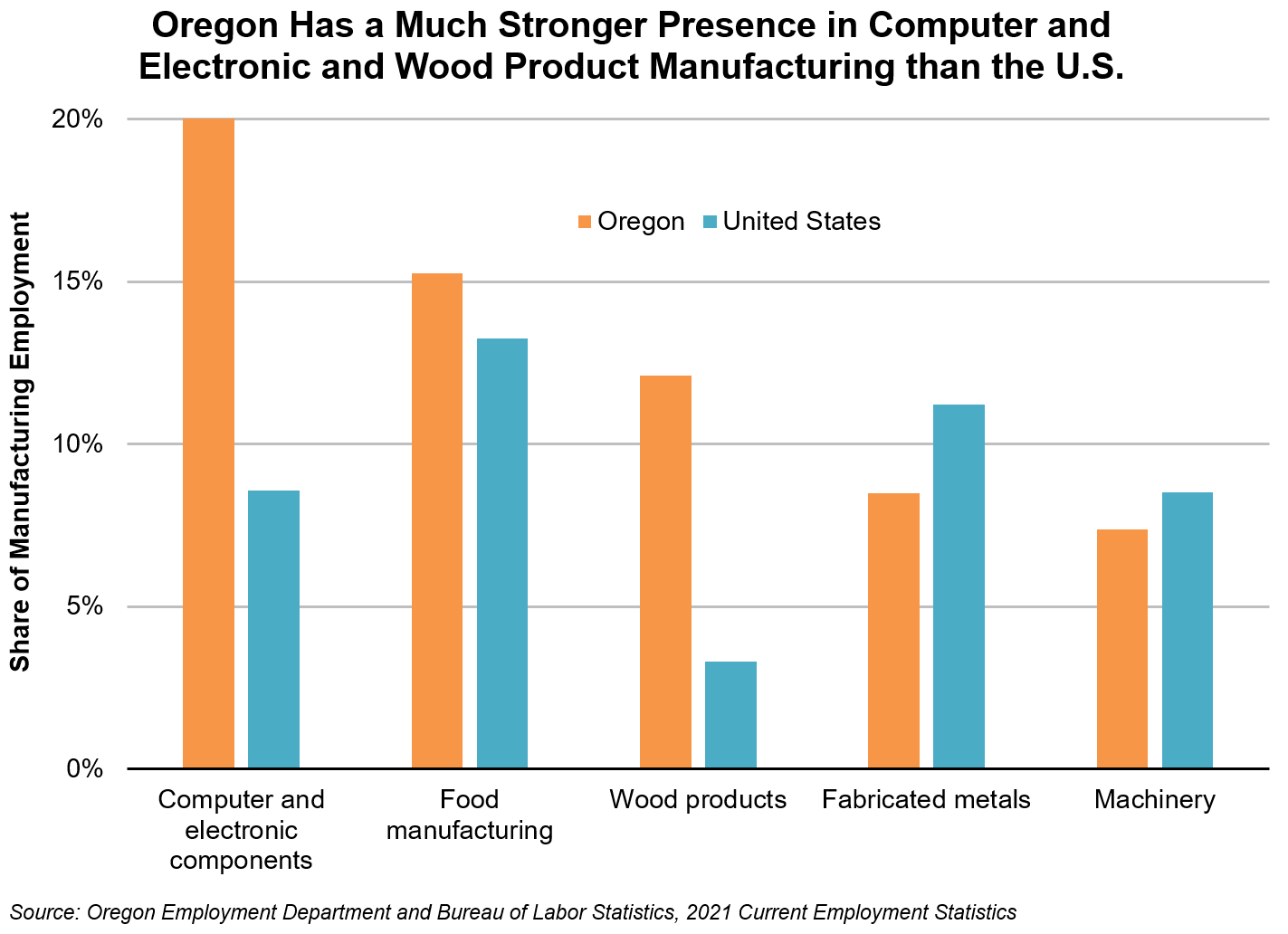 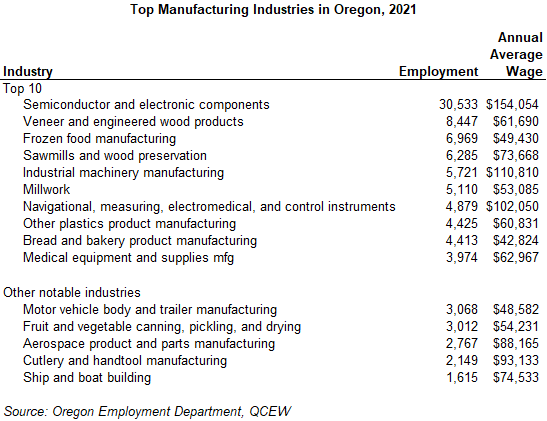 True to Oregon’s long history in forestry, three of Oregon’s top industries are tied to our natural resources: veneer and engineered wood products (8,400 jobs), sawmills and wood preservation (6,300 jobs), and millwork (5,100 jobs). While employment in wood product manufacturing is but a fraction of what it was a few decades ago, these three industries combined play an influential role in Oregon’s manufacturing sector.

Oregon is well-known across the country for its fresh produce. The number of food preservation businesses, specifically the canning, pickling, and drying of fruits and vegetables, has grown across the state substantially over the years. Employment has risen steadily over the years, and is highly seasonal due to employment spikes around harvest time, though there has been less fluctuation in the past seven years. The annual average wage for fruit and vegetable canning, pickling, and drying is $54,200.

Another notable industry in Oregon is the motor vehicle body and trailer manufacturing industry. This industry includes recreational vehicle manufacturers. Prior to the recession in 2007, this industry peaked at 4,800 jobs. After suffering massive losses during the recession, the industry was left with less than 2,000 jobs. Since then, employment has rebounded and steadily climbed to around 3,000 jobs.

The share of manufacturing workers by gender has remained unchanged for the past 20 years, at about 73% men and 27% women. Overall in 2021, women accounted for 47% of Oregon’s private-sector workers; that share also hasn’t changed much since 2001, but it is of course more balanced with women’s share of the population. 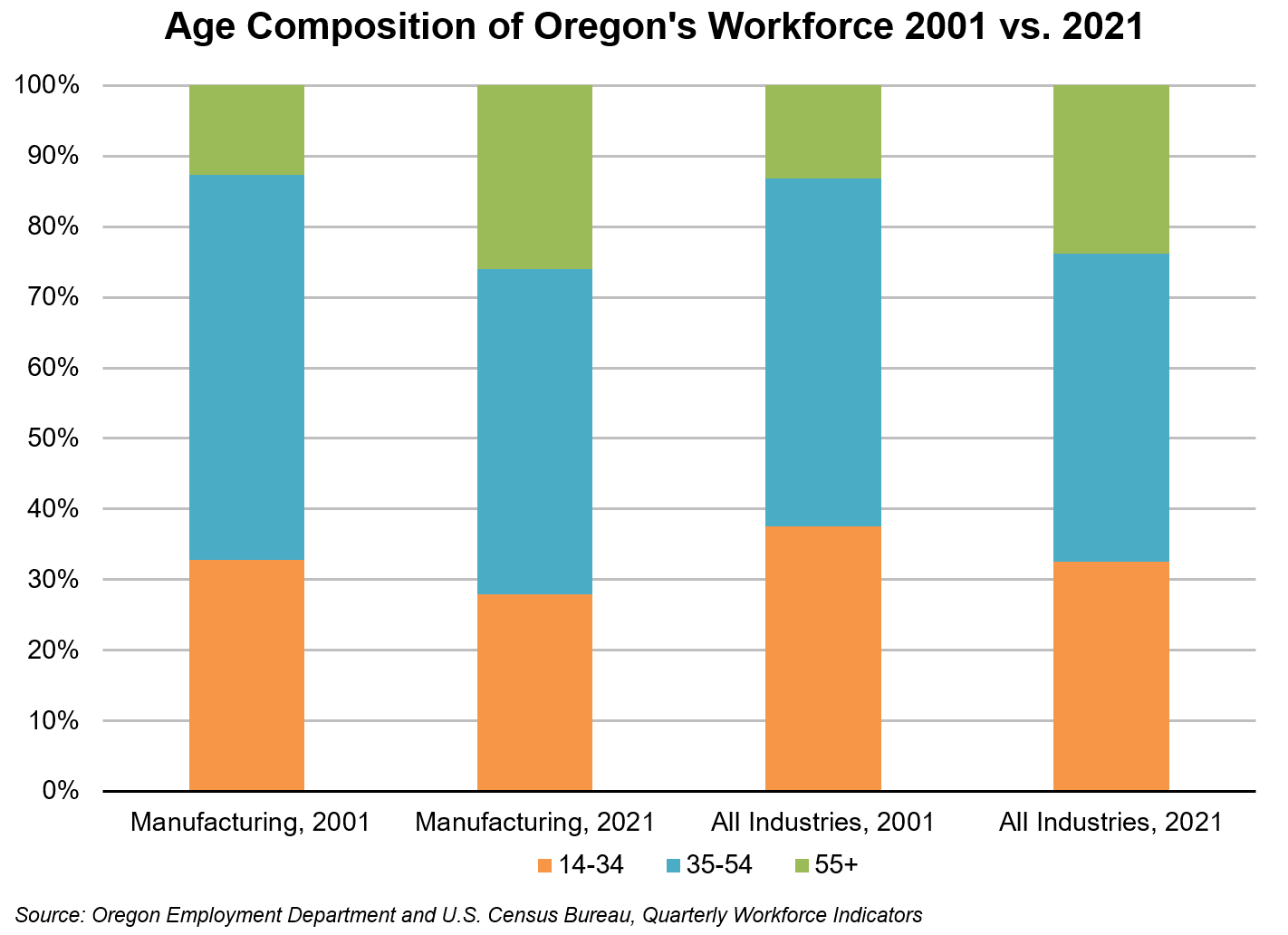 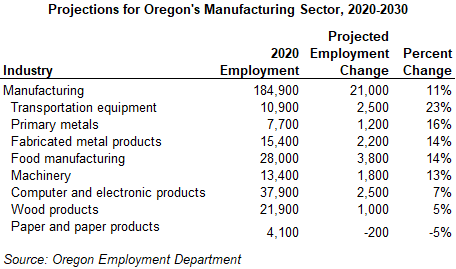 Manufacturing is expected to grow by 21,000 jobs between 2020 and 2030. In addition to these job gains, there will be many more job openings due to the need to replace workers who leave manufacturing jobs, most of them ending their careers and retiring. Manufacturing may be anticipated to grow at a slower rate than the overall economy in coming years, but as the workforce continues to age there will be lots of job opportunities in the manufacturing industry of the future.

Oregon’s manufacturing sector has experienced faster long-term growth than manufacturing across the nation. The state’s manufacturing sector has suffered relatively heavier losses leading up to and during the initial months of the COVID-19 pandemic and has yet to recover all jobs lost. However, 11% growth is projected from 2020 to 2030, and many job opportunities will be available as new jobs are created and workers leaving their current occupations are replaced.