According to the Oregon Encyclopedia, “Oregon's racial makeup has been shaped by three black exclusion laws that were in place during much of the region's early history. These laws, all later rescinded, largely succeeded in their aim of discouraging free blacks from settling in Oregon early on, ensuring that Oregon would develop as primarily white.” While the state has diversified considerably since its founding, Oregon still lags far behind the nation in race and ethnic diversity, ranking 30 out of 51 in the 2020 Diversity Index from the U.S. Census Bureau, with only a 46.1% chance that two Oregon residents chosen at random will be from different race or ethnicity groups compared with 61.1% nationally.

With the exception of Asian workers, people of color in Oregon’s workforce face higher unemployment rates and earn lower wages than non-Hispanic white workers, and work in lower-paying industries.

Though it is still predominantly white, Oregon’s population has continued to diversify in recent years. In 2020, the share of people of color in Oregon grew to 28.3% or 1.2 million people, a 45.5% increase from 2010. The term people of color is defined here as a broad group that includes those who identify as Black or African American, American Indian or Alaska Native, Asian, Native Hawaiian or other Pacific Islander, belonging to two or more race groups, or some other race except white alone, as well as Hispanic or Latinos of any race. Oregon’s 28.3% share is 14 percentage points lower than the national average, but the share of people of color in Oregon grew almost twice as quickly as it did nationally over the 10-year span. The share of residents who identified as two or more races in Oregon has increased more than any other racial or ethnic group, with a 206% increase (+298,600) over the past decade. While part of this group’s increase is due to real population growth, part of this growth can be attributed to changes the Census Bureau made to how it asks and records information about race and ethnicity as of 2020. 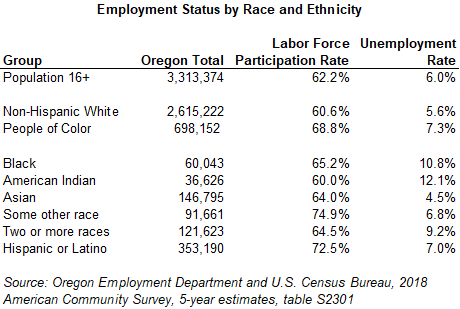 Despite being one of the least diverse large metro areas in the U.S., the Portland metro area is one of the most diverse regions in the state of Oregon. Almost one-third (31.3%) of the metro’s population (786,300 people) identified as a person of color in the 2020 Decennial Census. Salem is the metro area in Oregon with the highest share of people from communities of color at 35.8%. The metro regions in Oregon with the smallest shares of people of color are the Bend and Grants Pass metro areas. In both metros, fewer than one out of five residents are people of color. 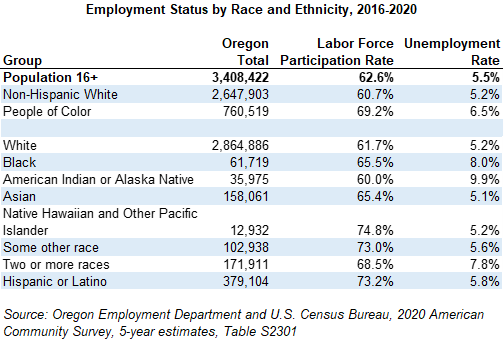 Disparities in Wages and Wealth

According to the U.S. Census Bureau’s American Community Survey, Oregon’s Asian residents have the highest wages among full-time, year-round workers, earning an average of $76,600 annually followed by white workers with an average of $64,800. From 2016 to 2020, average annual wages for workers of all other racial and ethnic groups ranged between $39,700 and $55,700 – at least $10,000 less than white workers and $20,000 less than Asian workers. 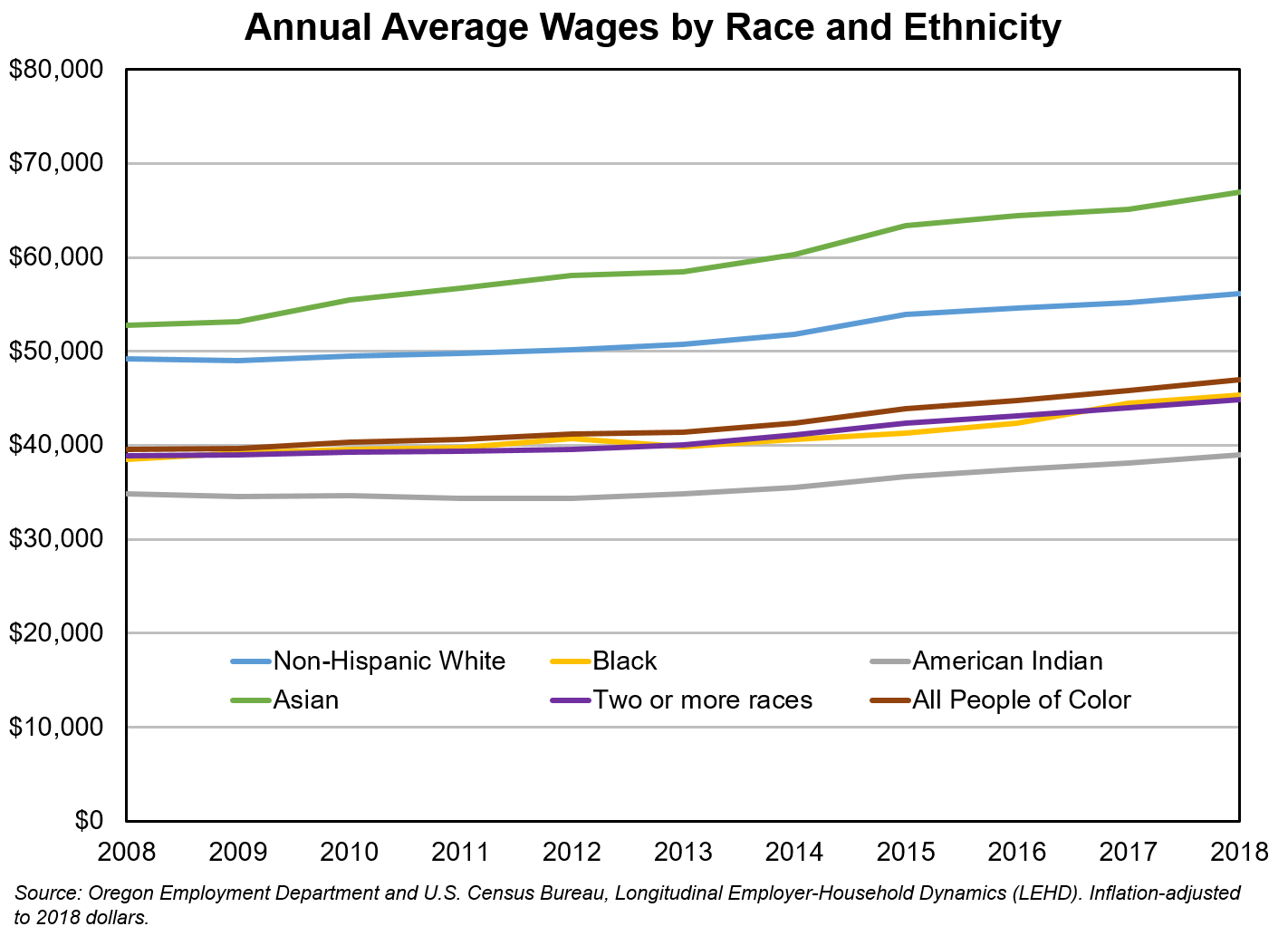 Educational attainment is also a factor. According to the 2020 American Community Survey, 56% of Asians over 25 have a bachelor’s degree or higher followed by 36% of non-Hispanic white residents in Oregon. Twenty-nine percent of those who are two or more races, 28% of Black Oregonians, and 20% of Native Hawaiians or other Pacific Islanders have a bachelor’s degree or higher. Seventeen percent of Hispanic or Latino residents, 16% of American Indian or Alaska Natives, and 15% of those who are some other race have a bachelor’s or advanced degree. Typically, those with higher education qualify for higher-paying jobs, which also factors into the higher annual average wages for Asian and non-Hispanic white workers. Since the majority of the Asian population in Oregon is foreign-born, our companies may court some of these highly educated workers to fill high-skill, high-wage positions. Oregon companies applied for nearly 2,300 H-1B visas in the first quarter of 2022, with the top three H-1B visa sponsors in Oregon being Intel, Nike, and Oregon Health and Science University.

It’s important to note that even when controlling for educational attainment, some groups still earn lower wages than their equally educated peers. Black or African American people in Oregon and the U.S. earn lower median wages across all levels of educational attainment compared with all other workers. Research from the Federal Reserve Bank suggests that national differences in earnings between Black and white workers are persistent, have grown over time, and can’t be completely explained by factors such as geographic location, age, educational attainment, part-time employment, industry of employment, or occupation.

Gaps in wealth also exist between people of different races and ethnicities. Research from the U.S. Federal Reserve Board found that in 2019, the median net worth of Black families in the U.S. was $24,100, less than 13% of the median for white families ($188,200). The median Hispanic family has $36,100 in wealth as of 2019 or 19% that of the median white family. The wealth gap is driven, in part, by large differences in homeownership. In 2020, 45.9% of Black households and 50.1% of Hispanic households owned their homes, compared with 75.0% of white households. The racial and ethnic wealth gap likely widened over the years since this analysis, as real estate values have accelerated faster than ever before according to Fannie Mae’s Home Price Index (20.0% over-the-year to Q1 2022), benefiting existing homeowners.

The majority of economic indicators are consistent for each racial and ethnic group. Groups in Oregon with higher rates of educational attainment tend to be employed in higher-paying industries, and as a result, have lower unemployment rates and higher wages.

As Oregon’s population continues to diversify, these patterns may change. Positive changes may depend on increasing access to education for people of color, creating pathways to employment in higher-wage fields, and pathways to homeownership.

For Oregon employers looking for ways to better support diversity in the workplace, Partners in Diversity offers a variety of resources tailored for employers and professionals of color in the Pacific Northwest.